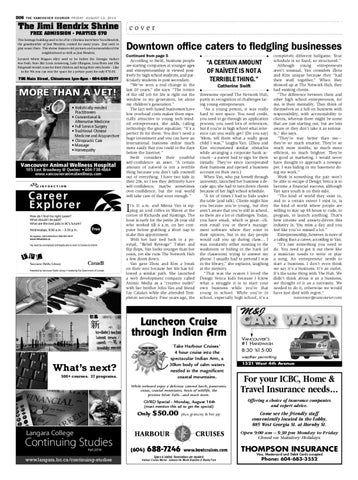 This heritage building used to be aVie’s Chicken Inn where Nora Hendrix, the grandmother of Jimi Hendrix, cooked for many years. Jimi used to play music there. This shrine features old pictures and memorabilia of the neighborhood as well as Jimi Hendrix. Located where Hogans Alley used to be before the Georgia viaduct was built. Stars like Louis Armstrong, Luke Ellington, Lena Horn and Ella Fitzgerald would come for fried chicken and bring their own bottle – Like in the 50s you can rent the space for a private party for only $70.00. 796 Main Street, Chinatown 1pm-6pm • 604-669-0377

Continued from page 5 According to Swift, business people are starting companies at younger ages and entrepreneurship is viewed positively by high school students, and particularly students in post secondary. “We’ve seen a real change in the last 20 years,” she says. “The notion of the old job for life is right out the window in my generation, let alone my children’s generation.” The fact web-based businesses have low overhead costs makes them especially attractive to young tech-minded entrepreneurs, she adds, calling technology the great equalizer. “It’s a perfect ﬁt for them. You don’t need a huge investment and you can have an international business online much more easily that you could in the days before the Internet.” Swift considers their youthful self-conﬁdence an asset. “A certain amount of naïveté is not a terrible thing because you don’t talk yourself out of everything. I have two kids in their 20s, so I see they deﬁnitely have self-conﬁdence, maybe sometimes over-conﬁdence, but the real world will take care of that soon enough.”

t’s 11 a.m. and Minna Van is sipping an iced coffee in Waves at the corner of Richards and Hastings. The hour is early for the petite 28-year-old who worked till 6 a.m. on her computer before grabbing a short nap to make this appointment. With her hair tied back in a ponytail, “Rebel Revenge” T-shirt and ﬂip-ﬂops, Van looks younger than her years, yet she runs The Network Hub a few doors down. Van gave Zhou and Kim a break on their rent because her life has followed a similar path. She launched a web development company called Atomic Media as a “creative outlet” with her brother John Van and friend Jay Catalan while she attended Templeton secondary. Four years ago, the

“A CERTAIN AMOUNT OF NAÏVETÉ IS NOT A TERRIBLE THING.” Catherine Swift

threesome opened The Network Hub, partly in recognition of challenges facing young entrepreneurs. “As a young person, it was really hard to rent space. You need credit, you need to go through an application process, you need lots of references, but if you’re in high school what reference can you really get? [Do you say] ‘Mom, tell them what a really great child I was,’” laughs Van. (Zhou and Kim encountered similar obstacles while arranging a corporate bank account—a parent had to sign for them initially. They’ve since incorporated their business and opened a business account on their own.) When Van, who put herself through university, launched her business a decade ago, she had to turn down clients because of her high school schedule. “A lot of times I had to hide under the table [and talk]. Clients might hire you because you’re young, but they aren’t aware that you’re still in school, so there are a lot of challenges. Today, you have email, which is great—clients email you or there’s management software where they enter in their opinion, but in my day people would call you up during class… I was constantly either running to the washroom or hiding in the back [of the classroom] trying to answer my phone. I usually had to pretend I was in the library,” she explains, laughing at the memory. “That was the reason I loved the Design Vetica kids because I know what a struggle it is to start your own business while you’re that young in school. While you’re in school, especially high school, it’s a

While onboard enjoy a delicious catered lunch, panoramic vistas, coastal mountains, hosts of wildlife, the pristine Silver Falls...and much more.

GVRD Special - Monday, August 16th (must mention this ad to get the special)

Space is limited. Reservations are required.

completely different ballgame. Your schedule is so ﬁxed, so structured.” Although young entrepreneurs aren’t unusual, Van considers Zhou and Kim unique because they “had their stuff together.” When they showed up at The Network Hub, they had existing clients. “The difference between them and other high school entrepreneurs, for me, is their mentality. They think of themselves as a full-on business with responsibility, with accountability to clients, whereas there might be some that are just starting out, but are less aware or they don’t take it as seriously,” she says. “They’re way better than me— they’re so much smarter. They’re so much more nimble, so much more efﬁcient, so much brighter. They’re so good at marketing. I would never have thought to approach a newspaper. I was hiding in my basement doing my work.” Work is something the pair won’t be able to escape if Design Vetica is to become a ﬁnancial success, although Van says youth is on their side. “The kind of world they exist in, and to a certain extent I exist in, is the kind of world where people are willing to stay up 48 hours to code, to program, to launch anything. That’s how intense and anxiety-driven this industry is. You miss a day and you feel like you’ve missed a lot.” Entrepreneurship, however, is more of a calling than a career, according to Van. “It’s just something you need to do. You need to get it out there like a musician needs to write or play a song. An entrepreneur needs to start a business. I don’t even think we say it’s a business. It’s an outlet. It’s the same thing with The Hub. We didn’t think about it as a business, we thought of it as a necessity. We needed to do it, otherwise we would have just died with regret.” noconnor@vancourier.com

For your ICBC, Home & Travel Insurance needs… Offering a choice of insurance companies and expert advice.