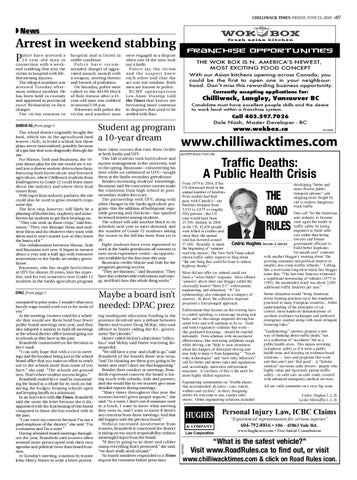 Arrest in weekend stabbing olice have arrested a 24-year-old man in connection with a weekend stabbing that sent the victim to hospital with lifethreatening injuries. The alleged assailant was arrested Tuesday afternoon without incident. He has been held in custody and appeared in provincial court Wednesday to face charges. The victim remains in

hospital and is listed in stable condition. Police have recommended charges of aggravated assault, assault with a weapon, uttering threats and breach of probation. On Saturday, police were called to the 46100 block of Bole Avenue after a 41year-old man was stabbed at around 5:30 p.m. Witnesses told police the victim and another man

SARDIS AG, from page 1 The school district originally bought the land, which sits in the agricultural land reserve (ALR), to build a school, but those plans never materialized, possibly because of a gas line that runs diagonally through the site. For Massie, Toth and Baumann, the 10year dream plan for the site would see it turned into a diverse student-driven show farm, featuring both horticulture and livestock agriculture, where Chilliwack students from kindergarten to Grade 12 could learn more about the industry and where their food comes from. With input from industry partners, the site could also be used to grow research crops some day. The first step, however, will likely be a planting of blueberries, raspberry and strawberries for students to get their bearings on. “They can work on those crops,” said Baumann. “They can damage them and maltreat them and do whatever they want with them and it won’t matter just so they learn the basics of it.” The collaboration between Massie, Toth and Baumann isn’t new. It began in earnest about a year and a half ago with extensive renovations to the Sardis secondary greenhouse. Baumann, who has taught horticulture at UFV for almost 20 years, lent his expertise, and for two semesters now Grade 12 students in the Sardis agriculture program DPAC, from page 1 compared to prior years. I wonder what your hourly wage would work out to for some of you.” At the meeting, trustees voted for a schedule that would see them hold four fewer public board meetings next year, and they also adopted a motion to hold all meetings at the school district office instead going out to schools as they have in the past. Brandreth commented on the decision in her e-mail. “I can only hope that with a cut in meetings and the location being just at the school board office that you make an effort to reach out to the schools more than some of you have,” she said. “The schools are ground zero. That’s where student success begins.” Brandreth ended her e-mail by commending the board as a whole for its work on balancing the budget, keeping schools open and keeping layoffs to a minimum. In an interview with the Times, Brandreth said she wrote the letter because she is disappointed with the functioning of this board compared to those she has worked with in the past. “I can voice my concern because I’m not a paid employee of the district,” she said. “I’m a volunteer and I’m a voter.” Having attended board meetings throughout the year, Brandreth said trustees often seemed more preoccupied with their own agendas and political views than board business. At Tuesday’s meeting, a motion by trustee John-Henry Harter to write a letter protest-

were engaged in a dispute when one of the men took out a knife. Po l i c e s a y t h e v i c t i m and the suspect knew each other and that the act was not random. Both men are known to police. RCMP spokesperson Lea-Anne Dunlop told the Times that knives are becoming more common in disputes that used to be settled with fists.

Student ag program a 10-year dream have taken courses that earn them credits at both Sardis and UFV. This fall students took horticulture and equine management at the university, and in the spring, Baumann—volunteering his time while on sabbatical at UFV—taught them at the Sardis secondary greenhouse. Besides increasing students’ knowledge, Baumann said the concurrent courses make the transition from high school to postsecondary studies less scary. The partnership with UFV, along with other changes in the Sardis agriculture program—like the addition of hydroponic vegetable growing and chickens—has sparked increased interest among students. The school will add another block to its schedule next year to meet demand, and the number of Grade 12 students taking the course in the fall has risen from six to 20. Eight students have even registered to work at the Sardis greenhouse all summer to earn work experience credit—an opportunity available for the first time this year. Baumann credits Massie and Toth for the program’s growing success. “They are fantastic,” said Baumann. “They have this unbelievable enthusiasm and energy, and that’s how this whole thing works.”

Maybe a board isn’t needed: DPAC prez ing inadequate education funding in the province devolved into a debate between Harter and trustee Doug McKay, who took offence to Harter calling the B.C. government “the Liberals.” Harter called Mckay’s objections “ridiculous” and McKay said Harter was being disrespectful. “We still have a year and a half to go,” said Brandreth of the board’s three-year term, “and I’m thinking are these guys going to be better next year? I don’t see that happening.” Besides their conduct at meetings, Brandreth expressed concern the board is losing touch with schools, kids and parents, and she would like to see trustees give more detailed reports during meetings. “Many times throughout this year the trustees haven’t given proper reports,” she said. “As a voter, I don’t care if someone went to a lunch. I want to know what meeting they went to, and I want to know if there’s any concerns from those meetings. And that did happen with the previous board.” Without increased involvement from trustees, Brandreth is concerned the district is taking on too much responsibility without meaningful input from the board. “If they’re going to sit there and rubber stamp everything that’s presented,” she said, “we don’t really need a board.” No board members responded to a Times request for comment before press time.

From 1979 to 2004, if the US downward trend in the annual number of fatalities from crashes had kept pace with Canada’s—our fatalities dropped from 5,933 to 2,875 or roughly fifty percent—the US total would have been 25,500. Instead, in 2004 in the US, 42,836 people were killed in crashes and since then, the annual total has hovered around Cedric Hughes 37,000. Recently, to mark the beginning of ‘summer road trip season’, The New York Times asked eleven traffic safety experts to blog about “the one thing that could be done to reduce highway deaths.” Most did not offer (or, indeed, could not find) a “silver bullet” response. Most offered ‘answers’ about what one blogger called the classically known “three E’s”: enforcement, engineering, and education. “E” for epidemiology also emerged as a category of answers. In short, the collective response proposed a four-pronged approach. Enforcement that focuses on the existing laws to control speeding, to encourage wearing seat belts, and to discourage impaired driving has saved lives and will continue to do so. Tried and tested regulatory schemes that work— like graduated licensing—should be enacted nationally. Even schemes with inconclusive effectiveness, like restricting cellphone usage while driving, can “help to raise awareness about the dangers of distracted driving and may help to keep it from happening.” “Novel risky technologies” and “new risky behaviors” call for better and newer rules and regulations and, accordingly, innovative enforcement measures. A corollary of this is the need for more highly skilled regulators. Engineering communities as “livable places that accommodate all users—cars, transit, walkers and cyclists,” in short, designing streets for everyone to use, creates safer streets. Other engineering solutions included

One call “for the American auto industry to become once again the leader in traffic safety by hiring engineers to build safer cars rather than hiring lawyers and former government officials to Barrister & Solicitor build better loopholes for unsafe cars” contrasts with another blogger’s warning about “the growing consumer and political interest in smaller, less crash-worthy vehicles.” Calling this a worrisome long-term trend, this blogger notes that, “The last time America witnessed a significant downsizing of vehicles (1975 to 1985), the unintended result was about 2,000 additional traffic fatalities per year.” Better education would “bring American driver training practices up to the standards practiced in many European countries…better understanding of the principles of car control, more hands-on demonstrations of accident avoidance techniques and preferred emergency conduct along with more stringent licensing rules.” “Epidemiology” answers propose a new way of thinking about traffic death, “not as a collection of “accidents” but as a public health crisis. This means investing in highway safety as if it were a public health issue and insisting on evidence-based solutions — laws and programs that work and that aren’t just ‘feel good’. A “holistic solution” envisions safer drivers—people who highly value and rigorously pursue traffic safety—in safer cars on safer roads, covered with enhanced emergency medical services. All are valid comments on a very big issue. Cedric Hughes L.L.B. Leslie McGuffin L.L.B.

“What is the safest vehicle?” Visit www.RoadRules.ca to find out, or visit