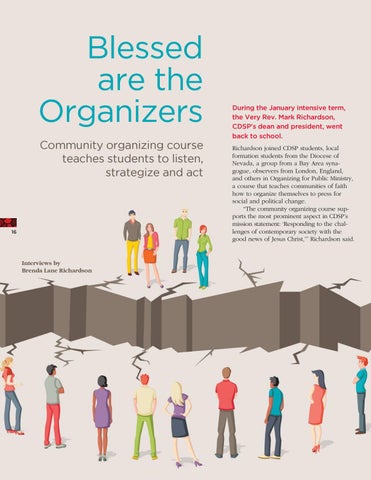 During the January intensive term, the Very Rev. Mark Richardson, CDSP’s dean and president, went back to school. Richardson joined CDSP students, local formation students from the Dio­­cese of Nevada, a group from a Bay Area synagogue, observers from London, England, and others in Organizing for Public Ministry, a course that teaches communities of faith how to organize themselves to press for social and political change. “The community organizing course supports the most prominent aspect in CDSP’s mission statement: ‘Responding to the challenges of con­­temporary society with the good news of Jesus Christ,’” Richardson said.

The Industrial Areas Foundation, or IAF, is the organization founded by legendary organizer Saul Alinsky, who developed the techniques the IAF now teaches to “grow the voices of families and communities that have little power over decisions that impact their own lives,” as the organization’s website now says. The IAF’s method proceeds from the notion that communities know best what they most need. The organizer’s job is not to arrive with an agenda for progress, but with a method to tease out the community’s desires and strengths. The IAF method uses one-onone conversations, house meetings and large public “actions” to build local organizations that are large enough and passionate enough that their demands cannot be ignored. “The Gospel was never meant to be a private affair of the heart alone,” Richardson said, “so learning the skills taught in Industrial Areas Foundation’s community organizing program, of building public relationships and community modes of interaction, is in keeping with the mission impulse found in CDSP’s curriculum.” “I was impressed by how challenging it was to contemplate power, particularly in our individual reactions to it as Christians,” said Judith Lyons, a low-residency MDiv student from the Diocese of Los Angeles. “I

was also impressed by the passion of those who do this work and equally impressed by the procedural, strategic, realistic and practical aspect of it as well. It felt remarkably professional in the midst of so many of us who resist ‘politics.’ I felt a bit ashamed by my own discomfort. But I was also inspired to share what I have learned with my friends and congregation.”

“Building community while working towards issues of justice seems so important right now to counteract fear, which is being used as a political tool to divide our nation.” — Christina Boehm Carlson

The course was offered in two sections. The CDSP students taking the class for credit had a substantial reading list to complete before the class began and papers due when it was over. They met each morning with the Rev. Dr. Ruth Meyers, CDSP’s academic dean, to reflect on the theological foundations and pastoral use of community organizing. Richardson and others joined the group later for sessions taught by four IAF organizers. Church Divinity School of the Pacific • Spring 2017 C R O S S I N G S