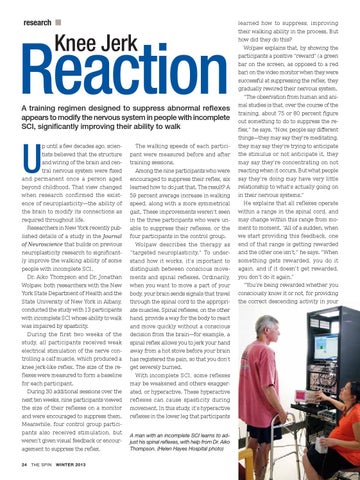 A training regimen designed to suppress abnormal reflexes appears to modify the nervous system in people with incomplete SCI, significantly improving their ability to walk

p until a few decades ago, scien-

tists believed that the structure

learned how to suppress, improving their walking ability in the process. But how did they do this?

Wolpaw explains that, by showing the

participants a positive “reward” (a green bar on the screen, as opposed to a red

bar) on the video monitor when they were successful at suppressing the reflex, they gradually rewired their nervous system.

“The observation from human and ani-

mal studies is that, over the course of the

training, about 75 or 80 percent figure out something to do to suppress the reflex,” he says. “Now, people say different

things—they may say they’re meditating, The walking speeds of each partici-

they may say they’re trying to anticipate

pant were measured before and after

the stimulus or not anticipate it, they

Among the nine participants who were

reacting when it occurs. But what people

learned how to do just that. The result? A

relationship to what’s actually going on

speed, along with a more symmetrical

He explains that all reflexes operate

may say they’re concentrating on not

and permanent once a person aged

encouraged to suppress their reflex, six

when research confirmed the exist-

in their nervous systems.”

within a range in the spinal cord, and

able to suppress their reflexes, or the

ment to moment. “All of a sudden, when

Wolpaw describes the therapy as

end of that range is getting rewarded

stand how it works, it’s important to

something gets rewarded, you do it

consciously know it or not, for providing

and wiring of the brain and central nervous system were fixed

beyond childhood. That view changed

in the three participants who were un-

may change within this range from mo-

four participants in the control group.

we start providing this feedback, one

“targeted neuroplasticity.” To under-

and the other one isn’t,” he says. “When

again, and if it doesn’t get rewarded,

lished details of a study in the Journal

Wolpaw, both researchers with the New

York State Department of Health and the State University of New York in Albany, conducted the study with 13 participants

with incomplete SCI whose ability to walk was impaired by spasticity.

During the first two weeks of the

electrical stimulation of the nerve con-

trolling a calf muscle, which produced a knee jerk-like reflex. The size of the reflexes were measured to form a baseline

when you want to move a part of your

through the spinal cord to the appropriate muscles. Spinal reflexes, on the other hand, provide a way for the body to react

and move quickly without a conscious decision from the brain—for example, a

has registered the pain, so that you don’t get severely burned.

With incomplete SCI, some reflexes

may be weakened and others exagger-

reflexes can cause spasticity during

During 30 additional sessions over the

the size of their reflexes on a monitor and were encouraged to suppress them. Meanwhile, four control group participants also received stimulation, but

weren’t given visual feedback or encouragement to suppress the reflex. 24

ated, or hyperactive. These hyperactive movement. In this study, it’s hyperactive reflexes in the lower leg that participants

A man with an incomplete SCI learns to adjust his spinal reflexes, with help from Dr. Aiko Thompson. (Helen Hayes Hospital photo)

“You’re being rewarded whether you

the correct descending activity in your