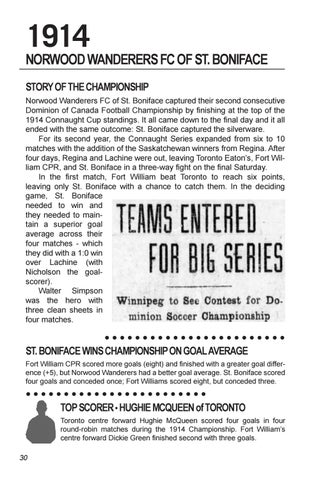 NORWOOD WANDERERS FC OF ST. BONIFACE STORY OF THE CHAMPIONSHIP Norwood Wanderers FC of St. Boniface captured their second consecutive Dominion of Canada Football Championship by finishing at the top of the 1914 Connaught Cup standings. It all came down to the final day and it all ended with the same outcome: St. Boniface captured the silverware. For its second year, the Connaught Series expanded from six to 10 matches with the addition of the Saskatchewan winners from Regina. After four days, Regina and Lachine were out, leaving Toronto Eaton’s, Fort William CPR, and St. Boniface in a three-way fight on the final Saturday. In the first match, Fort William beat Toronto to reach six points, leaving only St. Boniface with a chance to catch them. In the deciding game, St. Boniface needed to win and they needed to maintain a superior goal average across their four matches - which they did with a 1:0 win over Lachine (with Nicholson the goalscorer). Walter Simpson was the hero with three clean sheets in four matches. 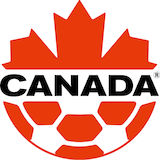