Canada's History: On a mission 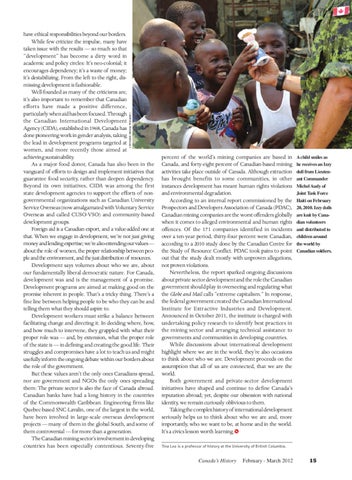 have ethical responsibilities beyond our borders. While few criticize the impulse, many have taken issue with the results — so much so that “development” has become a dirty word in academic and policy circles: It’s neo-colonial; it encourages dependency; it’s a waste of money; it’s destabilizing. From the left to the right, dismissing development is fashionable. Well-founded as many of the criticisms are, it’s also important to remember that Canadian efforts have made a positive difference, particularly when aid has been focused. Through the Canadian International Development Agency (CIDA), established in 1968, Canada has done pioneering work in gender analysis, taking the lead in development programs targeted at women, and more recently those aimed at achieving sustainability. As a major food donor, Canada has also been in the vanguard of efforts to design and implement initiatives that guarantee food security, rather than deepen dependency. Beyond its own initiatives, CIDA was among the first state development agencies to support the efforts of nongovernmental organizations such as Canadian University Service Overseas (now amalgamated with Voluntary Service Overseas and called CUSO-VSO) and community-based development groups. Foreign aid is a Canadian export, and a value-added one at that. When we engage in development, we’re not just giving money and lending expertise; we’re also extending our values — about the role of women, the proper relationship between people and the environment, and the just distribution of resources. Development says volumes about who we are, about our fundamentally liberal democratic nature. For Canada, development was and is the management of a promise. Development programs are aimed at making good on the promise inherent in people. That’s a tricky thing. There’s a fine line between helping people to be who they can be and telling them what they should aspire to. Development workers must strike a balance between facilitating change and directing it. In deciding where, how, and how much to intervene, they grappled with what their proper role was — and, by extension, what the proper role of the state is — in defining and creating the good life. Their struggles and compromises have a lot to teach us and might usefully inform the ongoing debate within our borders about the role of the government. But these values aren’t the only ones Canadians spread, nor are government and NGOs the only ones spreading them: The private sector is also the face of Canada abroad. Canadian banks have had a long history in the countries of the Commonwealth Caribbean. Engineering firms like Quebec-based SNC-Lavalin, one of the largest in the world, have been involved in large-scale overseas development projects — many of them in the global South, and some of them controversial — for more than a generation. The Canadian mining sector’s involvement in developing countries has been especially contentious. Seventy-five

percent of the world’s mining companies are based in Canada, and forty-eight percent of Canadian-based mining activities take place outside of Canada. Although extraction has brought benefits to some communities, in other instances development has meant human rights violations and environmental degradation. According to an internal report commissioned by the Prospectors and Developers Association of Canada (PDAC), Canadian mining companies are the worst offenders globally when it comes to alleged environmental and human rights offences. Of the 171 companies identified in incidents over a ten-year period, thirty-four percent were Canadian, according to a 2010 study done by the Canadian Centre for the Study of Resource Conflict. PDAC took pains to point out that the study dealt mostly with unproven allegations, not proven violations. Nevertheless, the report sparked ongoing discussions about private sector development and the role the Canadian government should play in overseeing and regulating what the Globe and Mail calls “extreme capitalism.” In response, the federal government created the Canadian International Institute for Extractive Industries and Development. Announced in October 2011, the institute is charged with undertaking policy research to identify best practices in the mining sector and arranging technical assistance to governments and communities in developing countries. While discussions about international development highlight where we are in the world, they’re also occasions to think about who we are. Development proceeds on the assumption that all of us are connected, that we are the world. Both government and private-sector development initiatives have shaped and continue to define Canada’s reputation abroad; yet, despite our obsession with national identity, we remain curiously oblivious to them. Taking the complex history of international development seriously helps us to think about who we are and, more importantly, who we want to be, at home and in the world. It’s a civics lesson worth learning. Tina Loo is a professor of history at the University of British Columbia.

A child smiles as he receives an Izzy doll from Lieutenant Commander Michel Audy of Joint Task Force Haiti on February 20, 2010. Izzy dolls are knit by Canadian volunteers and distributed to children around the world by Canadian soldiers.

Canada's History: On a mission 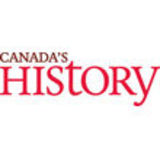