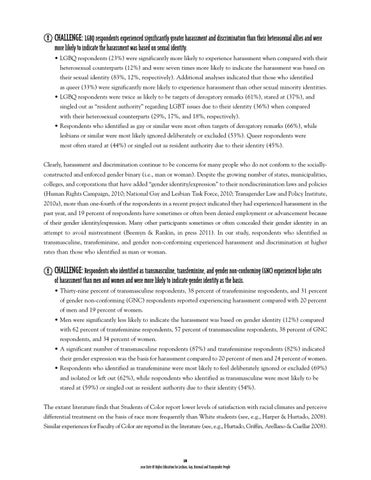 CHALLENGE: LGBQ respondents experienced significantly greater harassment and discrimination than their heterosexual allies and were more likely to indicate the harassment was based on sexual identity. • LGBQ respondents (23%) were significantly more likely to experience harassment when compared with their heterosexual counterparts (12%) and were seven times more likely to indicate the harassment was based on their sexual identity (83%, 12%, respectively). Additional analyses indicated that those who identified as queer (33%) were significantly more likely to experience harassment than other sexual minority identities. • LGBQ respondents were twice as likely to be targets of derogatory remarks (61%), stared at (37%), and singled out as “resident authority” regarding LGBT issues due to their identity (36%) when compared with their heterosexual counterparts (29%, 17%, and 18%, respectively). • Respondents who identified as gay or similar were most often targets of derogatory remarks (66%), while lesbians or similar were most likely ignored deliberately or excluded (53%). Queer respondents were most often stared at (44%) or singled out as resident authority due to their identity (45%). Clearly, harassment and discrimination continue to be concerns for many people who do not conform to the sociallyconstructed and enforced gender binary (i.e., man or woman). Despite the growing number of states, municipalities, colleges, and corporations that have added “gender identity/expression” to their nondiscrimination laws and policies (Human Rights Campaign, 2010; National Gay and Lesbian Task Force, 2010; Transgender Law and Policy Institute, 2010a), more than one-fourth of the respondents in a recent project indicated they had experienced harassment in the past year, and 19 percent of respondents have sometimes or often been denied employment or advancement because of their gender identity/expression. Many other participants sometimes or often concealed their gender identity in an attempt to avoid mistreatment (Beemyn & Rankin, in press 2011). In our study, respondents who identified as transmasculine, transfeminine, and gender non-conforming experienced harassment and discrimination at higher rates than those who identified as man or woman. 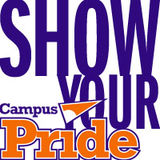 The State of Higher Education for LGBT People is the most comprehensive national research of its kind to date. The report documents experien...

The State of Higher Education for LGBT People is the most comprehensive national research of its kind to date. The report documents experien...