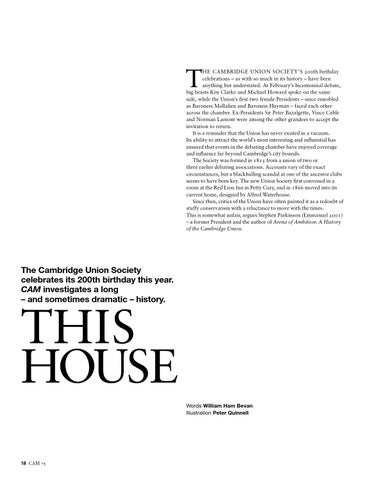 he Cambridge Union Society’s 200th birthday celebrations – as with so much in its history – have been anything but understated. At February’s bicentennial debate, big beasts Ken Clarke and Michael Howard spoke on the same side, while the Union’s first two female Presidents – since ennobled as Baroness Mallalieu and Baroness Hayman – faced each other across the chamber. Ex-Presidents Sir Peter Bazalgette, Vince Cable and Norman Lamont were among the other grandees to accept the invitation to return. It is a reminder that the Union has never existed in a vacuum. Its ability to attract the world’s most interesting and influential has ensured that events in the debating chamber have enjoyed coverage and influence far beyond Cambridge’s city bounds. The Society was formed in 1815 from a union of two or three earlier debating associations. Accounts vary of the exact circumstances, but a blackballing scandal at one of the ancestor clubs seems to have been key. The new Union Society first convened in a room at the Red Lion Inn in Petty Cury, and in 1866 moved into its current home, designed by Alfred Waterhouse. Since then, critics of the Union have often painted it as a redoubt of stuffy conservatism with a reluctance to move with the times. This is somewhat unfair, argues Stephen Parkinson (Emmanuel 2001) – a former President and the author of Arena of Ambition: A History of the Cambridge Union. 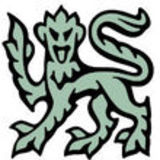