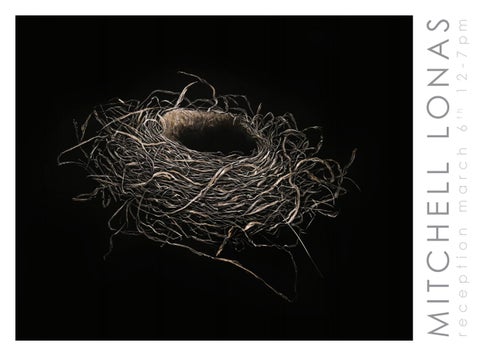 SOLACE In Solace, his seventh solo exhibition at Callan Contemporary, Mitchell Lonas debuts a profoundly beautiful suite of incised and hammered artworks on painted aluminum panel, which capture moments of heightened connection with the natural world. The series grew out of meditations and readings he began in late 2019, as he studied texts by Michael A. Singer, and Eckhart Tolle related to the topics of consciousness and awareness. Last March, in the midst of this research, as he was taking a long walk near his home studio, he found himself suddenly confronted eye to eye with two deer. The hushed, electric silence of that uncanny inter-species encounter supercharged his own awareness of the present moment, and the memory of that meeting became the cornerstone of his current exhibition. Lonas presents the deer in full-length gestural compositions as well as closer-cropped framings, which read as portraits. From the microcosm of an individual animal’s gaze, the artist makes a macrocosmic leap in his stunning The Birth of a Star, which zooms out to depict an entire galaxy at the moment of a new sun’s emergence. As astronomers such as the late Carl Sagan have pointed out, the matter that makes up all entities, organic and inorganic—including the humble doe in the woods—is the same “starstuff” that makes up the contents of deep space, a phenomenon that fascinates Lonas, influenced the current artworks, and led to the inclusion of celestial imagery including the earth’s moon. Joining these new additions are classic Lonas motifs, among them waterfalls, forests, owl and hawk feathers, and dandelion seed heads. Lonas studied art history at the University of Tennessee (Knoxville) and for many years has been based in Asheville, North Carolina, a stone’s throw from the Blue Ridge Mountain trails that feed his inspiration. His works are included in distinguished private, public, and corporate collections, including Morgan Stanley, Stanford University, Barclay Global Investors, Cooley LLP, and other Fortune 500 companies. Collectors are drawn to the sculptural quality of his works and their dance-like dialogue with light, which results from exacting proprietary techniques he developed over many years and continues to evolve. In the new pieces, to convey the minute detail of lunar craters, spiraling nebulae, and the gossamer of a doe’s eyelashes, he further modified his metal- and woodworking tools to puncture and perforate metal. The resulting surfaces shimmer and gleam, as if with preternatural presence. “I’m basically shading in reverse,” Lonas explains, “pulling light from darkness, bringing attention to the highlights, cultivating mystery... I’m inviting the viewer in, so they can fill in the rest.” These technical innovations parallel the series’s wider mission to blur the distinctions between part and whole and celebrate the constantly shifting relationships between them. There is something comforting and consoling in these works, hence the show’s title, reminding us to internalize and savor the gifts of awareness, acceptance, and gratitude.