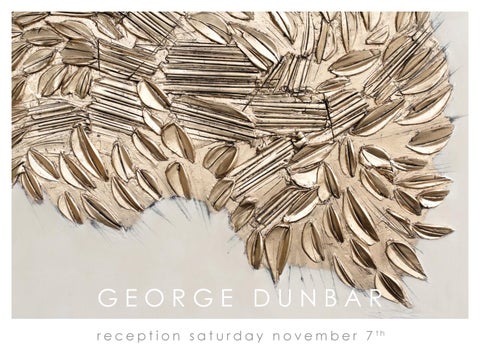 MERIDIAN In Meridian, his seventh solo exhibition with Callan Contemporary, renowned abstract artist George Dunbar reimagines many of the stylistic periods that have established him as a pioneer of innovative materials and techniques. Although it has the character of a retrospective, the exhibition is comprised of all new work—a contemporary survey of longstanding series that the artist, at age 93, is breathing fresh life into, continually reconfiguring and evolving his interpretations. “The single most important thing to me in art, especially at my age,” he reflects, “is that my work has a thumbprint that is recognizably mine. Even though I move between different periods, people can still see across the room that it’s my work. That is really paramount to me.” The works in the current show include updated iterations of classic Dunbar series such as Surge, Coin du Lestin, Rouville, and Deity, the latter of which references the elegant torsos of Greco-Roman sculptures and bas-reliefs. Integrating hard-edge abstraction, organic shapes, rich textures, and a sophisticated interplay between figure and ground, the paintings often incorporate nuanced shades of metallic leaf such as palladium, red gold, and moon gold (a combination of palladium and silver alloy, which has a warm, almost beige patina). The myriad layers of clay that underlie the forms affect the hue of these various leafs, leading to a complex chromatic dialogue. Dunbar’s groundbreaking career began with studies at Tyler School of Art (Temple University, Philadelphia) and the Grande Chaumière Academy in Paris. He was active in New York City at the height of Abstract Expressionism, exhibiting in 1953 alongside Franz Kline, one of the titans of the movement. When he returned to his native Louisiana in 1957, he co-founded Orleans Gallery, the region’s first artist co-op, which became an influential hub for contemporary abstraction. Since then—exhibited around the world, the subject of glowing reviews in publications such as The New York Times, Art in America, and ARTnews—Dunbar’s paintings and sculptures have been acquired into prestigious private, corporate, and institutional collections, including The Whitney Museum of American Art, The British Museum (London), New Orleans Museum of Art, Ogden Museum of Southern Art, and North Carolina Museum of Art. He has been honored with career surveys such as Dunbar: Mining the Surfaces (New Orleans Museum of Art, 1997), George Dunbar: Southern Masters Series (Ogden Museum of Southern Art, 2007), Earth and Element: The Art of George Dunbar (Hilliard University Museum, University of Louisiana at Lafayette, 2014), and George Dunbar: Elements of Chance (New Orleans Museum of Art, 2016-2017). In 2018, he was the subject of the lavishly illustrated biographical monograph Distinctively Dunbar, published by Callan Contemporary. The title of the current exhibition, Meridian, has a twofold connotation. The word is defined as a land mass’s highest point (many of Dunbar’s series reference geographical and environmental phenomena), but it could also refer to this artist’s restless aesthetic experimentation. Even after a career spanning seven decades, he is always exceeding himself; uncannily, he seems forever at the high point of his career. Among the formal innovations in the new show is an increasing linearity in certain series, which incorporate modeling paste that has been dynamically textured with a variety of tools to impart an even more concentrated sense of compositional energy. There is also a new series called Crestone, which isolates a spiraling motif that longtime collectors will recognize as the central forms in the Rouville series. His insistence on constant modification and transformation are part of his temperament and philosophy. This is a man who has never rested on his laurels. “I enjoy revisiting and changing certain series,” he says. “I am frequently asked which piece of my work is my favorite. My answer is: the one I have yet to create.”