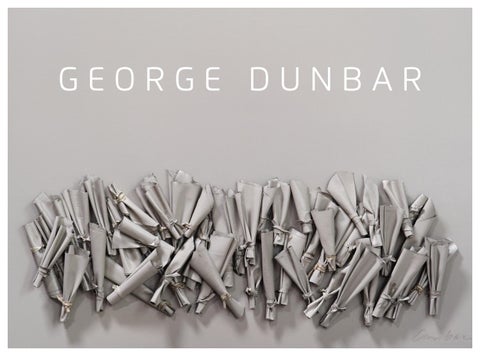 ALLUVION Callan Contemporary is pleased to announce a new exhibition by George Dunbar entitled Alluvion. Throughout his groundbreaking, seven-decade long career, Dunbar has continually reinvented his style by exploring unconventional techniques and approaches to materials. In so doing, he has recontextualized his aesthetic vocabulary and ideas that have intrigued him since the early stages of his artistic career. A common thread among these diverse practices is his unique deployment of alluvion, or clay. His compositions often begin with multiple layers of fine German clays, meticulously applied to the picture plane, which Dunbar builds up, gilds, distresses, and excavates, imparting dramatically topographical effects that imbue the paintings with sculptural qualities. In bas-relief as well as more traditionally two-dimensional pieces, the artist’s fluency in gestural, Hard Edge, and neo-Baroque idioms is anchored in a distinctive aesthetic thumbprint uniquely his own. Dunbar studied at the Tyler School of Art at Temple University (Philadelphia) and the Grande Chaumière Academy in Paris. During the heyday of Abstract Expressionism he was active in New York City, rubbing shoulders with—and learning valuable lessons from—AbEx titans such as Franz Kline, with whom he exhibited in 1953. Dunbar’s paintings and sculptures have been exhibited across the globe and acquired by prestigious private, corporate, and institutional collections, among them The British Museum (London), New Orleans Museum of Art, Ogden Museum of Southern Art, and North Carolina Museum of Art. He has been the subject of perceptive and enthusiastic reviews and feature stories in The New York Times, Art in America, ARTnews, La Revue Moderne among many others. Dunbar has played a seminal role in nurturing modern art in the American South, beginning in 1957, when he co-founded the Orleans Gallery, the region’s first artist co-op and an influential hub for contemporary abstraction. He has been honored with several museum retrospective exhibitions and career surveys, such as Dunbar: Mining the Surfaces (New Orleans Museum of Art, 1997), George Dunbar: Southern Masters Series (Ogden Museum of Southern Art, 2007), Earth and Element: The Art of George Dunbar (Hilliard University Museum, University of Louisiana at Lafayette, 2014), and George Dunbar: Elements of Chance (New Orleans Museum of Art, 2016-2017). Dunbar is known for his masterful handling of materials. As varied textures cross the picture plane, Dunbar creates surface transitions with impeccable precision and control. From flat planes to raised surfaces, from smooth, matte clay to textured metallic leaf, the transitions between elements are so seamless, they could only be achieved by an artist of Dunbar’s extraordinary technical skills and aesthetic vision. Alluvion at Callan Contemporary will consist of all new work. The gallery is also publishing a 250-page book highlighting the different periods of Dunbar’s artistic career. Several series are represented in the new exhibition, including Surge (titled after the lateral movement of waves rolling across a water body) and the Rag series, which Dunbar is reinterpreting and exhibiting again for the first time in many years. Across his broad spectrum of periods, processes, and materials, George Dunbar balances perfectionist technique with an appreciation for the inspired and random, turning the elements of the earth—clay, pigment, metal, and the human hand that shapes them—into objects of unparalleled sophistication, complexity, and beauty.

George Dunbar in his studio on Bayou Bonfouca, October 2018