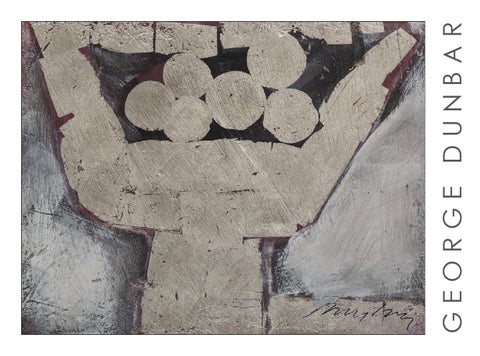 BACK TO BOGALUSA Renowned artist George Dunbar returns to Callan Contemporary with a dynamic exhibition of new paintings and sculpture. It is difficult to overestimate the importance this artist has held in the history of art in our region since the late 1950s. His current exhibition follows the comprehensive survey, Earth and Element: The Art of George Dunbar, which was on display this summer at the Hilliard Museum, University of Louisiana (Lafayette). Now 87, Dunbar is reinterpreting visual and thematic ideas that have long fascinated him. Uniting his two overarching bodies of work—hard-edged abstraction and organic forms in the lineage of Abstract Expressionism—is his virtuosic mastery of surface. The sensuality and tactility that inform his surfaces arise in part from the landscape in which he lives, Bayou Bonfouca on the north shore of Lake Pontchartrain. “When you look at the wetlands that influence my work,” he observes, “it’s like looking at a textural garden, where the surfaces and color fields change almost constantly.” Dunbar’s artwork figures prominently in private, corporate, and institutional collections and has been the subject of career retrospectives including Dunbar: Mining the Surfaces at the New Orleans Museum of Art. In 2008 he received the Governor’s Lifetime Achievement Award for his contributions to Louisiana’s cultural life. His exhibitions have been chronicled in scholarly essays and rapturous critical reviews for decades—perhaps most succinctly by critic Eric Bookhardt, who called him “an elder statesman, an influential regional tastemaker, a Renaissance man, and an enduring legend in his own right.” The large-scale relief sculpture and mixed-media paintings included in the Callan Contemporary exhibition, showcase the fluency with which Dunbar finesses distinctions between abstraction and figuration, two- and three-dimensionality, opulence and austerity, control and improvisation. “When you give up control and let things happen,” he says, “very frequently you get something that’s better than what you’d planned. I call it the accidental triumph.” One of Dunbar’s aesthetic signatures is his use of metallic leaf, a medium he first encountered in Baroque shrines throughout Europe and Central America. After layering gold, silver, or palladium leaf atop multiple layers of fine clay, he excavates and distresses the surfaces, using a broad range of tools. These techniques impart rich textural nuance and a palpable sense of history to the artworks—attributes that distinguish Dunbar’s entire output and remind us why he has become such a treasured figure in the artistic community of New Orleans and beyond.