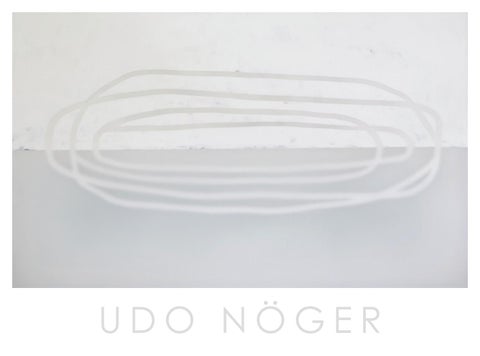 TRANSLUCENT In Translucent, his second solo exhibition with Callan Contemporary, Udo Nöger advances his ongoing exploration of light and form. The technique he pioneered in the early 1990s—creating paintings in which light itself is the medium—continues to captivate viewers around the world. Superimposing scrim-like layers of tautly stretched canvas (dipped in mineral oils to heighten translucency), he embeds an array of gestures and cut-out forms within the picture plane. This allows light to penetrate and travel through the painting in three dimensions, an effect unique to his work. With their immaculate whites and shimmering grayscale tones, the artworks are serenely contemplative, yet simultaneously radical in their reimagining of what a painting can be—a characteristic they share with the Arte Povera movement of the 1960s and 70s. “I had this idea to open up the canvas,” Nöger reflects. “For me it’s very necessary that I’m not sitting in front of a canvas, filling it up with forms; I’m more interested in the endless possibilities of what’s underneath the canvas.” Included in public, private, and corporate collections around the world, with critically acclaimed exhibitions in cultural capitals such as Paris, Madrid, Vienna, Milan, Hong Kong, and Los Angeles, Nöger’s works have been acquired into the permanent collections of the Metropolitan Museum of Art (New York), Art Institute of Chicago, Margulies Collection (Miami), and Haus der Kunst (Munich), among many others. Currently based in Florida and Switzerland, the Germanborn painter began his career influenced by the somber color palette of fellow German artists Anselm Kiefer and Georg Baselitz. In time, however, he moved beyond the dark historic overtones that haunted those artists’ sensibilities and forged an aesthetic wholly his own: free, buoyant, luminous, and ethereal. Across a range of scales, Nöger composes visual sonatas in which organic forms harmonize with geometric structure. He often bisects the canvas into rectangles, one opaque, the other more transparent, in order to reflect light in contrasting ways and intensify the pieces’ optical allure. This strategy, beyond its purely material effects, alludes to wider symbolic oppositions between yin and yang, positive and negative, inside and outside. The nested oval forms that reappear within his visual vocabulary recall the concert and sports arenas—with their overtones of spectacle and euphoria—that fascinated him during visits to Spain. These tie-ins between gesture and architectural space reinforce the formal and associative connections that give his paintings their remarkable depth, energy, and sense of the sublime. Richard Speer