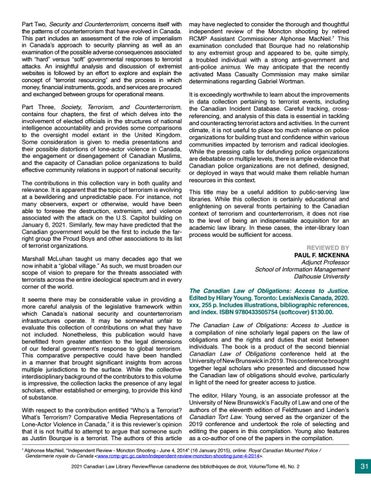 Part Two, Security and Counterterrorism, concerns itself with the patterns of counterterrorism that have evolved in Canada. This part includes an assessment of the role of imperialism in Canada’s approach to security planning as well as an examination of the possible adverse consequences associated with “hard” versus “soft” governmental responses to terrorist attacks. An insightful analysis and discussion of extremist websites is followed by an effort to explore and explain the concept of “terrorist resourcing” and the process in which money, financial instruments, goods, and services are procured and exchanged between groups for operational means. Part Three, Society, Terrorism, and Counterterrorism, contains four chapters, the first of which delves into the involvement of elected officials in the structures of national intelligence accountability and provides some comparisons to the oversight model extant in the United Kingdom. Some consideration is given to media presentations and their possible distortions of lone-actor violence in Canada, the engagement or disengagement of Canadian Muslims, and the capacity of Canadian police organizations to build effective community relations in support of national security. The contributions in this collection vary in both quality and relevance. It is apparent that the topic of terrorism is evolving at a bewildering and unpredictable pace. For instance, not many observers, expert or otherwise, would have been able to foresee the destruction, extremism, and violence associated with the attack on the U.S. Capitol building on January 6, 2021. Similarly, few may have predicted that the Canadian government would be the first to include the farright group the Proud Boys and other associations to its list of terrorist organizations. Marshall McLuhan taught us many decades ago that we now inhabit a “global village.” As such, we must broaden our scope of vision to prepare for the threats associated with terrorists across the entire ideological spectrum and in every corner of the world. It seems there may be considerable value in providing a more careful analysis of the legislative framework within which Canada’s national security and counterterrorism infrastructures operate. It may be somewhat unfair to evaluate this collection of contributions on what they have not included. Nonetheless, this publication would have benefitted from greater attention to the legal dimensions of our federal government’s response to global terrorism. This comparative perspective could have been handled in a manner that brought significant insights from across multiple jurisdictions to the surface. While the collective interdisciplinary background of the contributors to this volume is impressive, the collection lacks the presence of any legal scholars, either established or emerging, to provide this kind of substance. With respect to the contribution entitled “Who’s a Terrorist? What’s Terrorism? Comparative Media Representations of Lone-Actor Violence in Canada,” it is this reviewer’s opinion that it is not fruitful to attempt to argue that someone such as Justin Bourque is a terrorist. The authors of this article 7

may have neglected to consider the thorough and thoughtful independent review of the Moncton shooting by retired RCMP Assistant Commissioner Alphonse MacNeil.7 This examination concluded that Bourque had no relationship to any extremist group and appeared to be, quite simply, a troubled individual with a strong anti-government and anti-police animus. We may anticipate that the recently activated Mass Casualty Commission may make similar determinations regarding Gabriel Wortman. It is exceedingly worthwhile to learn about the improvements in data collection pertaining to terrorist events, including the Canadian Incident Database. Careful tracking, crossreferencing, and analysis of this data is essential in tackling and counteracting terrorist actors and activities. In the current climate, it is not useful to place too much reliance on police organizations for building trust and confidence within various communities impacted by terrorism and radical ideologies. While the pressing calls for defunding police organizations are debatable on multiple levels, there is ample evidence that Canadian police organizations are not defined, designed, or deployed in ways that would make them reliable human resources in this context. This title may be a useful addition to public-serving law libraries. While this collection is certainly educational and enlightening on several fronts pertaining to the Canadian context of terrorism and counterterrorism, it does not rise to the level of being an indispensable acquisition for an academic law library. In these cases, the inter-library loan process would be sufficient for access. REVIEWED BY PAUL F. MCKENNA Adjunct Professor School of Information Management Dalhousie University The Canadian Law of Obligations: Access to Justice. Edited by Hilary Young. Toronto: LexisNexis Canada, 2020. xxx, 255 p. Includes illustrations, bibliographic references, and index. ISBN 9780433505754 (softcover) $130.00. The Canadian Law of Obligations: Access to Justice is a compilation of nine scholarly legal papers on the law of obligations and the rights and duties that exist between individuals. The book is a product of the second biennial Canadian Law of Obligations conference held at the University of New Brunswick in 2019. This conference brought together legal scholars who presented and discussed how the Canadian law of obligations should evolve, particularly in light of the need for greater access to justice. The editor, Hilary Young, is an associate professor at the University of New Brunswick’s Faculty of Law and one of the authors of the eleventh edition of Feldthusen and Linden’s Canadian Tort Law. Young served as the organizer of the 2019 conference and undertook the role of selecting and editing the papers in this compilation. Young also features as a co-author of one of the papers in the compilation.