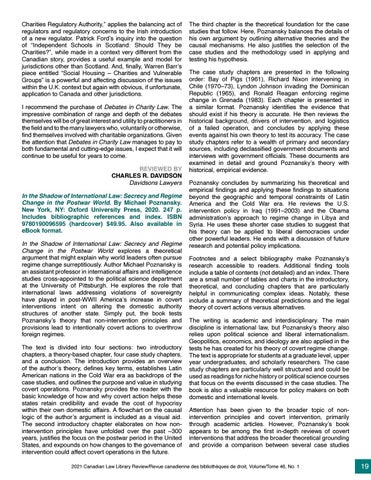 Charities Regulatory Authority,” applies the balancing act of regulators and regulatory concerns to the Irish introduction of a new regulator. Patrick Ford’s inquiry into the question of “Independent Schools in Scotland: Should They be Charities?”, while made in a context very different from the Canadian story, provides a useful example and model for jurisdictions other than Scotland. And, finally, Warren Barr’s piece entitled “Social Housing – Charities and Vulnerable Groups” is a powerful and affecting discussion of the issues within the U.K. context but again with obvious, if unfortunate, application to Canada and other jurisdictions. I recommend the purchase of Debates in Charity Law. The impressive combination of range and depth of the debates themselves will be of great interest and utility to practitioners in the field and to the many lawyers who, voluntarily or otherwise, find themselves involved with charitable organizations. Given the attention that Debates in Charity Law manages to pay to both fundamental and cutting-edge issues, I expect that it will continue to be useful for years to come. REVIEWED BY CHARLES R. DAVIDSON Davidsons Lawyers In the Shadow of International Law: Secrecy and Regime Change in the Postwar World. By Michael Poznansky. New York, NY: Oxford University Press, 2020. 247 p. Includes bibliographic references and index. ISBN 9780190096595 (hardcover) $49.95. Also available in eBook format. In the Shadow of International Law: Secrecy and Regime Change in the Postwar World explores a theoretical argument that might explain why world leaders often pursue regime change surreptitiously. Author Michael Poznansky is an assistant professor in international affairs and intelligence studies cross-appointed to the political science department at the University of Pittsburgh. He explores the role that international laws addressing violations of sovereignty have played in post-WWII America’s increase in covert interventions intent on altering the domestic authority structures of another state. Simply put, the book tests Poznansky’s theory that non-intervention principles and provisions lead to intentionally covert actions to overthrow foreign regimes. The text is divided into four sections: two introductory chapters, a theory-based chapter, four case study chapters, and a conclusion. The introduction provides an overview of the author’s theory, defines key terms, establishes Latin American nations in the Cold War era as backdrops of the case studies, and outlines the purpose and value in studying covert operations. Poznansky provides the reader with the basic knowledge of how and why covert action helps these states retain credibility and evade the cost of hypocrisy within their own domestic affairs. A flowchart on the causal logic of the author’s argument is included as a visual aid. The second introductory chapter elaborates on how nonintervention principles have unfolded over the past ~300 years, justifies the focus on the postwar period in the United States, and expounds on how changes to the governance of intervention could affect covert operations in the future.

The third chapter is the theoretical foundation for the case studies that follow. Here, Poznansky balances the details of his own argument by outlining alternative theories and the causal mechanisms. He also justifies the selection of the case studies and the methodology used in applying and testing his hypothesis. The case study chapters are presented in the following order: Bay of Pigs (1961), Richard Nixon intervening in Chile (1970–73), Lyndon Johnson invading the Dominican Republic (1965), and Ronald Reagan enforcing regime change in Grenada (1983). Each chapter is presented in a similar format. Poznansky identifies the evidence that should exist if his theory is accurate. He then reviews the historical background, drivers of intervention, and logistics of a failed operation, and concludes by applying these events against his own theory to test its accuracy. The case study chapters refer to a wealth of primary and secondary sources, including declassified government documents and interviews with government officials. These documents are examined in detail and ground Poznansky’s theory with historical, empirical evidence. Poznansky concludes by summarizing his theoretical and empirical findings and applying these findings to situations beyond the geographic and temporal constraints of Latin America and the Cold War era. He reviews the U.S. intervention policy in Iraq (1991–2003) and the Obama administration’s approach to regime change in Libya and Syria. He uses these shorter case studies to suggest that his theory can be applied to liberal democracies under other powerful leaders. He ends with a discussion of future research and potential policy implications. Footnotes and a select bibliography make Poznansky’s research accessible to readers. Additional finding tools include a table of contents (not detailed) and an index. There are a small number of tables and charts in the introductory, theoretical, and concluding chapters that are particularly helpful in communicating complex ideas. Notably, these include a summary of theoretical predictions and the legal theory of covert actions versus alternatives. The writing is academic and interdisciplinary. The main discipline is international law, but Poznansky’s theory also relies upon political science and liberal internationalism. Geopolitics, economics, and ideology are also applied in the tests he has created for his theory of covert regime change. The text is appropriate for students at a graduate level, upper year undergraduates, and scholarly researchers. The case study chapters are particularly well structured and could be used as readings for niche history or political science courses that focus on the events discussed in the case studies. The book is also a valuable resource for policy makers on both domestic and international levels. Attention has been given to the broader topic of nonintervention principles and covert intervention, primarily through academic articles. However, Poznansky’s book appears to be among the first in-depth reviews of covert interventions that address the broader theoretical grounding and provide a comparison between several case studies