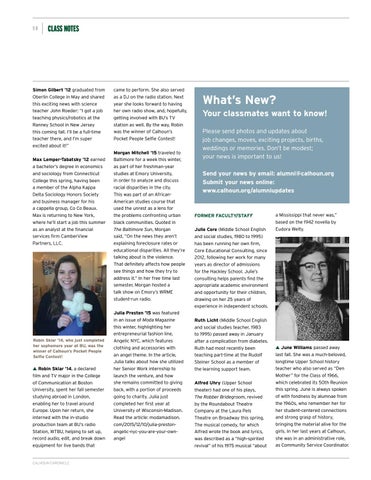 Simon Gilbert ’12 graduated from Oberlin College in May and shared this exciting news with science teacher John Roeder: “I got a job teaching physics/robotics at the Ranney School in New Jersey this coming fall. I’ll be a full-time teacher there, and I’m super excited about it!” Max Lemper-Tabatsky ’12 earned a bachelor’s degree in economics and sociology from Connecticut College this spring, having been a member of the Alpha Kappa Delta Sociology Honors Society and business manager for his a cappella group, Co Co Beaux. Max is returning to New York, where he’ll start a job this summer as an analyst at the financial services firm CamberView Partners, LLC.

Robin Sklar ’14, who just completed her sophomore year at BU, was the winner of Calhoun’s Pocket People Selfie Contest!

s Robin Sklar ’14, a declared film and TV major in the College of Communication at Boston University, spent her fall semester studying abroad in London, enabling her to travel around Europe. Upon her return, she interned with the in-studio production team at BU’s radio Station, WTBU, helping to set up, record audio, edit, and break down equipment for live bands that

came to perform. She also served as a DJ on the radio station. Next year she looks forward to having her own radio show, and, hopefully, getting involved with BU’s TV station as well. By the way, Robin was the winner of Calhoun’s Pocket People Selfie Contest! Morgan Mitchell ’15 traveled to Baltimore for a week this winter, as part of her freshman-year studies at Emory University, in order to analyze and discuss racial disparities in the city. This was part of an AfricanAmerican studies course that used the unrest as a lens for the problems confronting urban black communities. Quoted in The Baltimore Sun, Morgan said, “On the news they aren’t explaining foreclosure rates or educational disparities. All they’re talking about is the violence. That definitely affects how people see things and how they try to address it.” In her free time last semester, Morgan hosted a talk show on Emory’s WRME student-run radio. Julia Presten ’15 was featured in an issue of Moda Magazine this winter, highlighting her entrepreneurial fashion line, Angelic NYC, which features clothing and accessories with an angel theme. In the article, Julia talks about how she utilized her Senior Work internship to launch the venture, and how she remains committed to giving back, with a portion of proceeds going to charity. Julia just completed her first year at University of Wisconsin-Madison. Read the article: modamadison. com/2015/12/10/julia-prestonangelic-nyc-you-are-your-ownangel

What’s New? Your classmates want to know! Please send photos and updates about job changes, moves, exciting projects, births, weddings or memories. Don’t be modest; your news is important to us! Send your news by email: alumni@calhoun.org Submit your news online: www.calhoun.org/alumniupdates

Former Faculty/Staff Julie Core (Middle School English and social studies, 1980 to 1995) has been running her own firm, Core Educational Consulting, since 2012, following her work for many years as director of admissions for the Hackley School. Julie’s consulting helps parents find the appropriate academic environment and opportunity for their children, drawing on her 25 years of experience in independent schools. Ruth Licht (Middle School English and social studies teacher, 1983 to 1995) passed away in January after a complication from diabetes. Ruth had most recently been teaching part-time at the Rudolf Steiner School as a member of the learning support team. Alfred Uhry (Upper School theater) had one of his plays, The Robber Bridegroom, revived by the Roundabout Theatre Company at the Laura Pels Theatre on Broadway this spring. The musical comedy, for which Alfred wrote the book and lyrics, was described as a “high-spirited revival” of his 1975 musical “about

a Mississippi that never was,” based on the 1942 novella by Eudora Welty.

s June Williams passed away last fall. She was a much-beloved, longtime Upper School history teacher who also served as “Den Mother” for the Class of 1966, which celebrated its 50th Reunion this spring. June is always spoken of with fondness by alumnae from the 1960s, who remember her for her student-centered connections and strong grasp of history, bringing the material alive for the girls. In her last years at Calhoun, she was in an administrative role, as Community Service Coordinator. 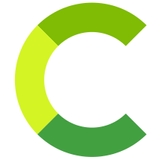