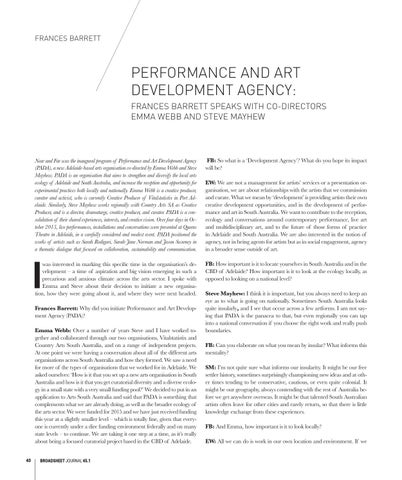 Near and Far was the inaugural program of Performance and Art Development Agency (PADA), a new Adelaide-based arts organisation co-directed by Emma Webb and Steve Mayhew. PADA is an organisation that aims to strengthen and diversify the local arts ecology of Adelaide and South Australia, and increase the reception and opportunity for experimental practices both locally and nationally. Emma Webb is a creative producer, curator and activist, who is currently Creative Producer of Vitalstatistix in Port Adelaide. Similarly, Steve Mayhew works regionally with Country Arts SA as Creative Producer, and is a director, dramaturge, creative producer, and curator. PADA is a consolidation of their shared experiences, interests, and creative vision. Over four days in October 2015, live performances, installations and conversations were presented at Queens Theatre in Adelaide, in a carefully considered and modest event. PADA positioned the works of artists such as Sarah Rodigari, Sarah-Jane Norman and Jason Sweeney in a thematic dialogue that focused on collaboration, sustainability and communication.

FB: So what is a ‘Development Agency’? What do you hope its impact will be?

was interested in marking this specific time in the organisation’s development – a time of aspiration and big vision emerging in such a precarious and anxious climate across the arts sector. I spoke with Emma and Steve about their decision to initiate a new organisation, how they were going about it, and where they were next headed.

Frances Barrett: Why did you initiate Performance and Art Development Agency (PADA)? Emma Webb: Over a number of years Steve and I have worked together and collaborated through our two organisations, Vitalstatistix and Country Arts South Australia, and on a range of independent projects. At one point we were having a conversation about all of the different arts organisations across South Australia and how they formed. We saw a need for more of the types of organisations that we worked for in Adelaide. We asked ourselves: ‘How is it that you set up a new arts organisation in South Australia and how is it that you get curatorial diversity and a diverse ecology in a small state with a very small funding pool?’ We decided to put in an application to Arts South Australia and said that PADA is something that complements what we are already doing, as well as the broader ecology of the arts sector. We were funded for 2015 and we have just received funding this year at a slightly smaller level – which is totally fine, given that everyone is currently under a dire funding environment federally and on many state levels – to continue. We are taking it one step at a time, as it’s really about being a focused curatorial project based in the CBD of Adelaide. 40

EW: We are not a management for artists’ services or a presentation organisation, we are about relationships with the artists that we commission and curate. What we mean by ‘development’ is providing artists their own creative development opportunities, and in the development of performance and art in South Australia. We want to contribute to the reception, ecology and conversations around contemporary performance, live art and multidisciplinary art, and to the future of those forms of practice in Adelaide and South Australia. We are also interested in the notion of agency, not in being agents for artists but as in social engagement, agency in a broader sense outside of art.

Steve Mayhew: I think it is important, but you always need to keep an eye as to what is going on nationally. Sometimes South Australia looks quite insularly, and I see that occur across a few artforms. I am not saying that PADA is the panacea to that, but even regionally you can tap into a national conversation if you choose the right work and really push boundaries. FB: Can you elaborate on what you mean by insular? What informs this mentality? SM: I’m not quite sure what informs our insularity. It might be our free settler history, sometimes surprisingly championing new ideas and at other times tending to be conservative, cautious, or even quite colonial. It might be our geography, always contending with the rest of Australia before we get anywhere overseas. It might be that talented South Australian artists often leave for other cities and rarely return, so that there is little knowledge exchange from these experiences. FB: And Emma, how important is it to look locally? EW: All we can do is work in our own location and environment. If we

The first issue of the new look Broadsheet Journal March 45.1 for 2016, will have focus on Biennale’s across the Asian Pacific region discussing the events and participating artists. Writers include Jacquine Millner and Paris Lettau discussing Sydney Biennale, Rebecca Coates writing about Adelaide Biennale artist Nell, Bille Lythberg SaVAge Klub at APT8, and Alex Gawronski about curatorial activism. With the highlight of the issue being an article my internationally recognised Australian art historian Terry Smith discussing Contemporary Curating, relating to his forthcoming publication Talking Contemporary Curating. Plus many more… 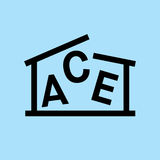