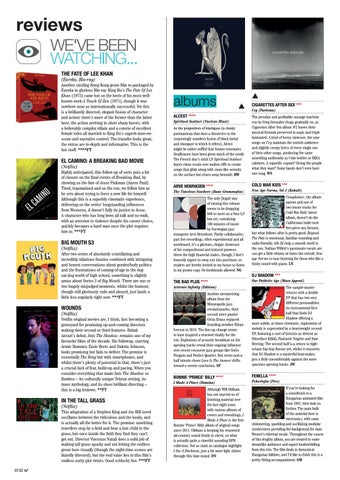 Another sizzling Hong Kong genre film re-packaged by Eureka in glorious Blu-ray. King Hu’s The Fate Of Lee Khan (1973) came hot on the heels of his most wellknown work A Touch Of Zen (1971), though it was nowhere near as internationally successful. Yet this is a brilliantly directed, elegant fusion of character and action: there’s more of the former than the latter here, the action arriving in short sharp bursts, with a believably complex villain and a coterie of excellent female roles all married to King Hu’s superb mise-enscene and narrative control. The transfer looks great, the extras are in-depth and informative. This is the hot stuff. ****FT

Highly anticipated, this follow-up of sorts puts a bit of closure on the final events of Breaking Bad, by showing us the fate of Jesse Pinkman (Aaron Paul). Tired, traumatised and on the run, we follow him as he sets about trying to force a new life for himself. Although this is a superbly cinematic experience, delivering on the series’ longstanding influences from Westerns, it doesn’t fully do justice to Jesse. A character who has long been all talk and no walk, with an aversion to violence despite his career choice, quickly becomes a hard man once the plot requires him to. ***FT

After two series of absolutely scintillating and incredibly hilarious funnies combined with intriguing and honest conversations about gender/body politics and the frustrations of coming-of-age in the dogeat-dog world of high school, something is slightly amiss about Series 3 of Big Mouth. There are one or two hugely misjudged moments, whilst the humour, though still gloriously rude and absurd, just lands a little less regularly right now. ***FT

Netflix original movies are, I think, fast becoming a graveyard for promising up-and-coming directors making their second or third features. Babak Anvari’s debut, Into The Shadow, remains one of my favourite films of the decade. His followup, starring Armie Hammer, Zazie Beets and Dakota Johnson, looks promising but fails to deliver. The premise is essentially The Ring but with smartphones, and whilst there’s plenty of potential in that, there’s just a crucial lack of fear, build-up and pacing. When you consider everything that made Into The Shadow so flawless – its culturally unique Tehran setting, its inner mythology, and its sheer brilliant directing – this is a big letdown. **FT

IN THE TALL GRASS (Netflix)

This adaptation of a Stephen King and Joe Hill novel oscillates between the ridiculous and the kooky, and is actually all the better for it. The premise: unwitting travellers stop by a field and hear a lost child in the grass, but once inside the field they find they can’t get out. Director Vincenzo Natali does a solid job of making tall grass spooky and not letting the endless green bore visually (though the night-time scenes are blandly directed), but the real value lies in this film’s endless nutty plot twists. Good schlocky fun. ***FT BUZZ 42

As the progenitors of blackgaze (a clunky portmanteau that does a disservice to the surprisingly seamless fusion of black metal and shoegaze to which it refers), Alcest might be rather miffed that former tourmates Deafheaven have been given much of the credit. The French duo’s sixth LP Spiritual Instinct layers clean vocals over molten riffs to create songs that glide along with swan-like serenity on the surface but churn away beneath. BW

The only (legal) way of owning this release seems to be dropping £60 or more on a four-LP box set, containing 160 minutes of music by Norwegian jazz trumpeter Arve Henriksen. Partly collaborative, part live recordings, often experimental and all unreleased, it’s a glorious, elegaic showcase of his compositional and textural prowess. Given the high financial stakes, though, I don’t honestly expect to sway you into purchase, so readers are hereby invited to my house to listen to my promo copy. No knobheads allowed. NG

Complainer, the album opener and one of two teaser tracks for Cold War Kids’ latest album, doesn’t do the Californian indie-rock five-piece any favours, but what follows after is pretty good. Beyond The Pale is emotional, familiar-sounding and radio-friendly; 4th Of July a smooth stroll in the sun. Nathan Willett’s passionate vocals are can get a little whiney at times but overall, New age Norms is easy listening for those who like a funky sound with piano. LN

Activate Infinity (Edition) Another mesmerising album from the Minneapolis jazz revolutionaries, their second since pianist Orrin Evans replaced founding member Ethan Iverson in 2018. The line-up change seems to have inspired a renewed vitality for the trio. Explosions of acoustic breakbeat on the opening tracks reveal their ongoing influence over recent crossover jazz groups like GoGo Penguin and Portico Quartet. But seven-and-ahalf minute closer Love Is The Answer drifts toward a serene conclusion. SP

The sample-master returns with a double EP that has two very different personalities. An instrumental first half that finds DJ Shadow offering a more subtle, at times cinematic, exploration of melody is superseded by a heavyweight second EP, featuring a cast of lyricists as diverse as Ghostface Killah, Fantastic Negrito and Sam Herring. The second half is a return to highoctane hip-hop flavour yet, whilst it reasserts that DJ Shadow is a masterful beat-maker, jars a little uncomfortably against the more spacious opening tracks. JW

I Made A Place (Domino)

Although Will Oldham has not starved us of listening material over the last eight years with various albums of covers and reworkings, I Made A Place is the first Bonnie ‘Prince’ Billy album of original songs since 2011. Oldham is keeping his renowned alt-country sound firmly in check, on what is actually quite a cheerful sounding BPB collection. Not as stark as catalogue highlight I See A Darkness, just a bit more light shines through this time round. DN

If you’re looking for a soundtrack to a Hungarian animated film from 1981, then look no further. The main bulk of the material here is electronics, with some shimmering, sparkling and oscillating modular synthesisers providing the background for Jane Weaver’s ethereal vocals. Throughout the course of this lengthy album, you are treated to some dreamlike ambience and expert knobtwiddling from this trio. The film deals in fantastical Hungarian folklore, and I’d like to think this is a pretty fitting accompaniment. GM

Our November 2019 issues, featuring an extensive interview with Sir Ranulph Fiennes, plus a look at His Dark Materials as it hits out TV screens. Also this month: interviews with Kate Tempest, Freya Ridings and Jonathan Pie. 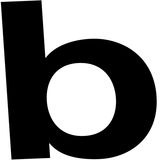