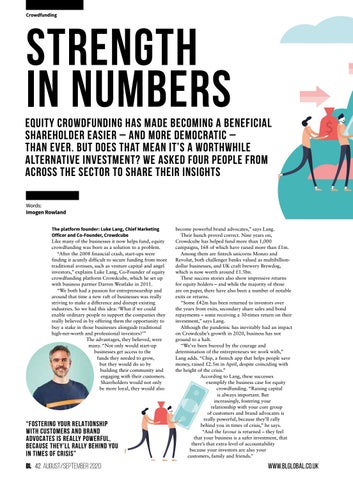 Equity crowdfunding has made becoming a beneficial shareholder easier – and more democratic – than ever. But does that mean it’s a worthwhile alternative investment? We asked four people from across the sector to share their insights Words: Imogen Rowland The platform founder: Luke Lang, Chief Marketing Officer and Co-Founder, Crowdcube Like many of the businesses it now helps fund, equity crowdfunding was born as a solution to a problem. “After the 2008 financial crash, start-ups were finding it acutely difficult to secure funding from more traditional avenues, such as venture capital and angel investors,” explains Luke Lang, Co-Founder of equity crowdfunding platform Crowdcube, which he set up with business partner Darren Westlake in 2011. “We both had a passion for entrepreneurship and around that time a new raft of businesses was really striving to make a difference and disrupt existing industries. So we had this idea: ‘What if we could enable ordinary people to support the companies they really believed in by offering them the opportunity to buy a stake in those businesses alongside traditional high-net-worth and professional investors?’” The advantages, they believed, were many. “Not only would start-up businesses get access to the funds they needed to grow, but they would do so by building their community and engaging with their customers. Shareholders would not only be more loyal, they would also

“FOSTERING YOUR RELATIONSHIP WITH CUSTOMERS AND BRAND ADVOCATES IS REALLY POWERFUL, BECAUSE THEY’LL RALLY BEHIND YOU IN TIMES OF CRISIS”

become powerful brand advocates,” says Lang. Their hunch proved correct. Nine years on, Crowdcube has helped fund more than 1,000 campaigns, 168 of which have raised more than £1m. Among them are fintech unicorns Monzo and Revolut, both challenger banks valued as multibilliondollar businesses, and UK craft brewery Brewdog, which is now worth around £1.5bn. These success stories also show impressive returns for equity holders – and while the majority of those are on paper, there have also been a number of notable exits or returns. “Some £42m has been returned to investors over the years from exits, secondary share sales and bond repayments – some receiving a 30-times return on their investment,” says Lang. Although the pandemic has inevitably had an impact on Crowdcube’s growth in 2020, business has not ground to a halt. “We’ve been buoyed by the courage and determination of the entrepreneurs we work with,” Lang adds. “Chip, a fintech app that helps people save money, raised £2.5m in April, despite coinciding with the height of the crisis.” According to Lang, these successes exemplify the business case for equity crowdfunding. “Raising capital is always important. But increasingly, fostering your relationship with your core group of customers and brand advocates is really powerful, because they’ll rally behind you in times of crisis,” he says. “And the favour is returned – they feel that your business is a safer investment, that there’s that extra level of accountability because your investors are also your customers, family and friends.”

How are various sectors likely to change following the coronavirus pandemic? How will wealth, real estate, fintech, financial services and esports have to adapt to changing customer needs? Where are the new opportunities to grow and thrive coming from? And how do you build the right culture to adapt? These are all issues we tackle in the new edition of Businesslife magazine – as business leaders in the Channel Islands focus on the new world. 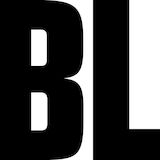