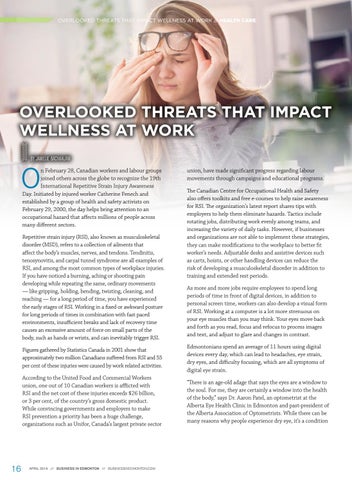 OVERLOOKED THREATS THAT IMPACT WELLNESS AT WORK BY JAMELIE BACHAALANI

n February 28, Canadian workers and labour groups joined others across the globe to recognize the 19th International Repetitive Strain Injury Awareness Day. Initiated by injured worker Catherine Fenech and established by a group of health and safety activists on February 29, 2000, the day helps bring attention to an occupational hazard that affects millions of people across many different sectors. Repetitive strain injury (RSI), also known as musculoskeletal disorder (MSD), refers to a collection of ailments that affect the body’s muscles, nerves, and tendons. Tendinitis, tenosynovitis, and carpal tunnel syndrome are all examples of RSI, and among the most common types of workplace injuries. If you have noticed a burning, aching or shooting pain developing while repeating the same, ordinary movements — like gripping, holding, bending, twisting, cleaning, and reaching — for a long period of time, you have experienced the early stages of RSI. Working in a fixed or awkward posture for long periods of times in combination with fast paced environments, insufficient breaks and lack of recovery time causes an excessive amount of force on small parts of the body, such as hands or wrists, and can inevitably trigger RSI.

union, have made significant progress regarding labour movements through campaigns and educational programs. The Canadian Centre for Occupational Health and Safety also offers toolkits and free e-courses to help raise awareness for RSI. The organization’s latest report shares tips with employers to help them eliminate hazards. Tactics include rotating jobs, distributing work evenly among teams, and increasing the variety of daily tasks. However, if businesses and organizations are not able to implement these strategies, they can make modifications to the workplace to better fit worker’s needs. Adjustable desks and assistive devices such as carts, hoists, or other handling devices can reduce the risk of developing a musculoskeletal disorder in addition to training and extended rest periods. As more and more jobs require employees to spend long periods of time in front of digital devices, in addition to personal screen time, workers can also develop a visual form of RSI. Working at a computer is a lot more strenuous on your eye muscles than you may think. Your eyes move back and forth as you read, focus and refocus to process images and text, and adjust to glare and changes in contrast.

Figures gathered by Statistics Canada in 2001 show that approximately two million Canadians suffered from RSI and 55 per cent of these injuries were caused by work related activities.

Edmontonians spend an average of 11 hours using digital devices every day, which can lead to headaches, eye strain, dry eyes, and difficulty focusing, which are all symptoms of digital eye strain.

According to the United Food and Commercial Workers union, one out of 10 Canadian workers is afflicted with RSI and the net cost of these injuries exceeds $26 billion, or 3 per cent, of the country’s gross domestic product. While convincing governments and employers to make RSI prevention a priority has been a huge challenge, organizations such as Unifor, Canada’s largest private sector

“There is an age-old adage that says the eyes are a window to the soul. For me, they are certainly a window into the health of the body,” says Dr. Aaron Patel, an optometrist at the Alberta Eye Health Clinic in Edmonton and past-president of the Alberta Association of Optometrists. While there can be many reasons why people experience dry eye, it’s a condition