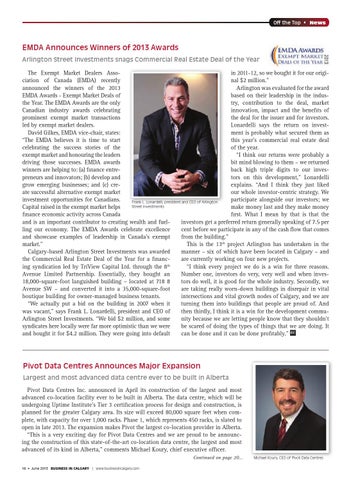 off the Top • News

emdA Announces Winners of 2013 Awards Arlington street Investments snags commercial real estate deal of the year in 2011-12, so we bought it for our origiThe Exempt Market Dealers Assonal $2 million.” ciation of Canada (EMDA) recently Arlington was evaluated for the award announced the winners of the 2013 based on their leadership in the indusEMDA Awards - Exempt Market Deals of try, contribution to the deal, market the Year. The EMDA Awards are the only innovation, impact and the benefits of Canadian industry awards celebrating the deal for the issuer and for investors. prominent exempt market transactions Lonardelli says the return on investled by exempt market dealers. ment is probably what secured them as David Gilkes, EMDA vice-chair, states: this year’s commercial real estate deal “The EMDA believes it is time to start of the year. celebrating the success stories of the “I think our returns were probably a exempt market and honouring the leaders bit mind blowing to them – we returned driving those successes. EMDA awards back high triple digits to our inveswinners are helping to: (a) finance entretors on this development,” Lonardelli preneurs and innovators; (b) develop and explains. “And I think they just liked grow emerging businesses; and (c) creour whole investor-centric strategy. We ate successful alternative exempt market participate alongside our investors; we investment opportunities for Canadians. Frank L. Lonardelli, president and CEO of Arlington Street Investments make money last and they make money Capital raised in the exempt market helps first. What I mean by that is that the finance economic activity across Canada investors get a preferred return generally speaking of 7.5 per and is an important contributor to creating wealth and fuelcent before we participate in any of the cash flow that comes ling our economy. The EMDA Awards celebrate excellence from the building.” and showcase examples of leadership in Canada’s exempt This is the 13th project Arlington has undertaken in the market.” Calgary-based Arlington Street Investments was awarded manner – six of which have been located in Calgary – and the Commercial Real Estate Deal of the Year for a financare currently working on four new projects. ing syndication led by TriView Capital Ltd. through the 8th “I think every project we do is a win for three reasons. Number one, investors do very, very well and when invesAvenue Limited Partnership. Essentially, they bought an tors do well, it is good for the whole industry. Secondly, we 18,000-square-foot languished building – located at 718 8 are taking really worn-down buildings in disrepair in vital Avenue SW – and converted it into a 35,000-square-foot intersections and vital growth nodes of Calgary, and we are boutique building for owner-managed business tenants. turning them into buildings that people are proud of. And “We actually put a bid on the building in 2007 when it then thirdly, I think it is a win for the development commuwas vacant,” says Frank L. Lonardelli, president and CEO of nity because we are letting people know that they shouldn’t Arlington Street Investments. “We bid $2 million, and some be scared of doing the types of things that we are doing. It syndicates here locally were far more optimistic than we were can be done and it can be done profitably.” BiC and bought it for $4.2 million. They were going into default

Pivot data centres Announces major expansion Largest and most advanced data centre ever to be built in Alberta Pivot Data Centres Inc. announced in April its construction of the largest and most advanced co-location facility ever to be built in Alberta. The data centre, which will be undergoing Uptime Institute’s Tier 3 certification process for design and construction, is planned for the greater Calgary area. Its size will exceed 80,000 square feet when complete, with capacity for over 1,000 racks. Phase 1, which represents 450 racks, is slated to open in late 2013. The expansion makes Pivot the largest co-location provider in Alberta. “This is a very exciting day for Pivot Data Centres and we are proud to be announcing the construction of this state-of-the-art co-location data centre, the largest and most advanced of its kind in Alberta,” comments Michael Koury, chief executive officer. Continued on page 20… 16 • June 2013 BUSINESS IN CALGARY | www.businessincalgary.com 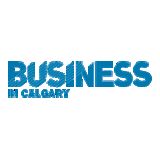