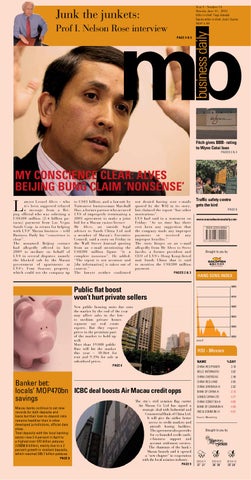 awyer Leonel Alves – who it’s been suggested relayed a message from a Beijing official who was soliciting a US$300 million (2.4 billion patacas) payment from Las Vegas Sands Corp. in return for helping with LVS’ Macau business – told Business Daily his “conscience is clear”. The unnamed Beijing contact had allegedly offered in late 2009 to mediate on behalf of LVS in several disputes: namely the blocked sale by the Macau government of apartments at LVS’s Four Seasons property, which could net the company up

to US$1 billion; and a lawsuit by Taiwanese businessman Marshall Hao, a former partner who accused LVS of improperly terminating a 2001 agreement to make a joint bid for a Macau casino licence Mr Alves, an outside legal adviser to Sands China Ltd and a member of Macau’s Executive Council, said a story on Friday in the Wall Street Journal quoting from an e-mail mentioning the US$300 million figure “is a complete nonsense”. He added: “The report is not accurate and [the information] is taken out of context.” The lawyer neither confirmed

nor denied having sent e-mails quoted by the WSJ in its story, but claimed the report “has other motivations”. LVS had said in a statement on Friday: “At no time has there ever been any suggestion that the company made any improper payments or received any improper benefits.” The story hinges on an e-mail allegedly from Mr Alves to Steve Jacobs, a former president and CEO of LVS’s Hong Kong-listed unit Sands China that is said to mention the US$300 million payment. Pages 2 &amp; 3

Public flat boost won’t hurt private sellers New public housing units due onto the market by the end of the year may affect sales in the lowto medium private homes segment say real estate experts. But they expect prices in the premium part of the market to hold up well. More than 19,000 public flats will hit the market this year – 10,064 for rent and 9,196 for sale at subsidised prices.

Macau banks continue to set new records for both deposits and loans but their loan-to-deposit ratio remains healthier than in other developed jurisdictions, official data show. Total deposits with the local banking sector rose 2.4 percent in April to a highest ever 470 billion patacas (US$58.8 billion), mainly due to a 2 percent growth in resident deposits, which reached 309.7 billion patacas.

Traffic safety centre gets the bird

Air Macau Co Ltd has signed a strategic deal with Industrial and Commercial Bank of China Ltd. It will give the airline better access to credit markets and aircraft leasing facilities. The agreement also provides for co-branded credit cards, e-business support and account settlement services. The chairman of the bank’s Macau branch said it opened a “new chapter” in cooperation with the local aviation industry. Page 9 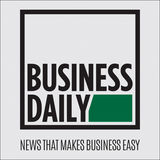