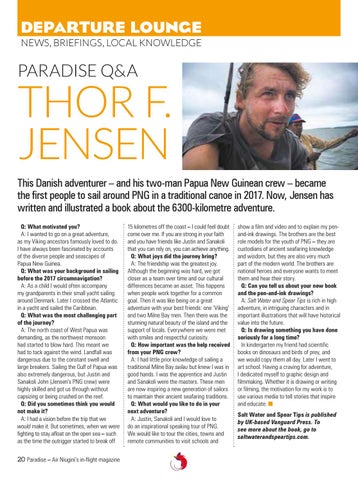 THOR F. JENSEN This Danish adventurer – and his two-man Papua New Guinean crew – became the first people to sail around PNG in a traditional canoe in 2017. Now, Jensen has written and illustrated a book about the 6300-kilometre adventure. Q: What motivated you? A: I wanted to go on a great adventure, as my Viking ancestors famously loved to do. I have always been fascinated by accounts of the diverse people and seascapes of Papua New Guinea. Q: What was your background in sailing before the 2017 circumnavigation? A: As a child I would often accompany my grandparents in their small yacht sailing around Denmark. Later I crossed the Atlantic in a yacht and sailed the Caribbean. Q: What was the most challenging part of the journey? A: The north coast of West Papua was demanding, as the northwest monsoon had started to blow hard. This meant we had to tack against the wind. Landfall was dangerous due to the constant swell and large breakers. Sailing the Gulf of Papua was also extremely dangerous, but Justin and Sanakoli John (Jensen’s PNG crew) were highly skilled and got us through without capsizing or being crushed on the reef. Q: Did you sometimes think you would not make it? A: I had a vision before the trip that we would make it. But sometimes, when we were fighting to stay afloat on the open sea – such as the time the outrigger started to break off

15 kilometres off the coast – I could feel doubt come over me. If you are strong in your faith and you have friends like Justin and Sanakoli that you can rely on, you can achieve anything. Q: What joys did the journey bring? A: The friendship was the greatest joy. Although the beginning was hard, we got closer as a team over time and our cultural differences became an asset. This happens when people work together for a common goal. Then it was like being on a great adventure with your best friends: one ‘Viking’ and two Milne Bay men. Then there was the stunning natural beauty of the island and the support of locals. Everywhere we were met with smiles and respectful curiosity. Q: How important was the help received from your PNG crew? A: I had little prior knowledge of sailing a traditional Milne Bay sailau but knew I was in good hands. I was the apprentice and Justin and Sanakoli were the masters. These men are now inspiring a new generation of sailors to maintain their ancient seafaring traditions. Q: What would you like to do in your next adventure? A: Justin, Sanakoli and I would love to do an inspirational speaking tour of PNG. We would like to tour the cities, towns and remote communities to visit schools and

show a film and video and to explain my penand-ink drawings. The brothers are the best role models for the youth of PNG – they are custodians of ancient seafaring knowledge and wisdom, but they are also very much part of the modern world. The brothers are national heroes and everyone wants to meet them and hear their story. Q: Can you tell us about your new book and the pen-and-ink drawings? A: Salt Water and Spear Tips is rich in high adventure, in intriguing characters and in important illustrations that will have historical value into the future. Q: Is drawing something you have done seriously for a long time? In kindergarten my friend had scientific books on dinosaurs and birds of prey, and we would copy them all day. Later I went to art school. Having a craving for adventure, I dedicated myself to graphic design and filmmaking. Whether it is drawing or writing or filming, the motivation for my work is to use various media to tell stories that inspire and educate. n Salt Water and Spear Tips is published by UK-based Vanguard Press. To see more about the book, go to saltwaterandspeartips.com.