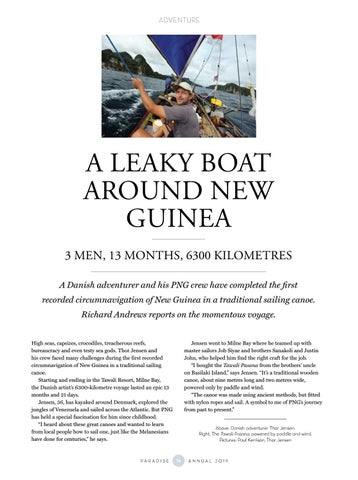 A LEAKY BOAT AROUND NEW GUINEA 3 MEN, 13 MONTHS, 6300 KILOMETRES A Danish adventurer and his PNG crew have completed the first recorded circumnavigation of New Guinea in a traditional sailing canoe. Richard Andrews reports on the momentous voyage. Jensen went to Milne Bay where he teamed up with master sailors Job Siyae and brothers Sanakoli and Justin John, who helped him find the right craft for the job. “I bought the Tawali Pasana from the brothers’ uncle on Basilaki Island,” says Jensen. “It’s a traditional wooden canoe, about nine metres long and two metres wide, powered only by paddle and wind. “The canoe was made using ancient methods, but fitted with nylon ropes and sail. A symbol to me of PNG’s journey from past to present.”

High seas, capsizes, crocodiles, treacherous reefs, bureaucracy and even testy sea gods. Thor Jensen and his crew faced many challenges during the first recorded circumnavigation of New Guinea in a traditional sailing canoe. Starting and ending in the Tawali Resort, Milne Bay, the Danish artist’s 6300-kilometre voyage lasted an epic 13 months and 21 days. Jensen, 36, has kayaked around Denmark, explored the jungles of Venezuela and sailed across the Atlantic. But PNG has held a special fascination for him since childhood. “I heard about these great canoes and wanted to learn from local people how to sail one, just like the Melanesians have done for centuries,” he says.

The best of Papua New Guinea travel and culture. The Paradise Annual 2019 showcases travel and tourism destinations across the country, highlighting the very best PNG has to offer.