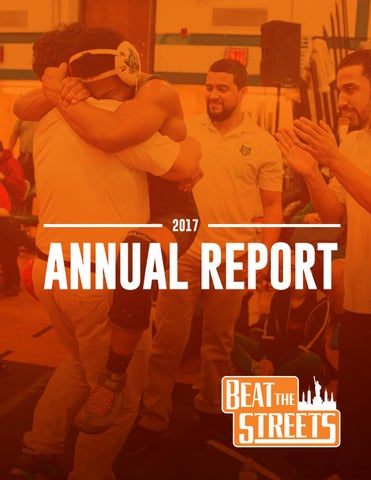 TABLE OF CONTENTS Board, Leadership Council, and Staff

Letter from the Executive Director and Chairman

BOARD, LEADERSHIP COUNCIL, AND STAFF

TO DEVELOP THE FULL POTENTIAL OF THE URBAN YOUTH AND TO STRENGTHEN THE CULTURE OF NEW YORK CITY WRESTLING.

WE’VE COME A LONG WAY SINCE 2005... In 2005, when BTS launched, there were only 26 wrestling programs in the entire city of New York. Today, we have close to 150 wrestling programs that are part of Beat the Streets’ co-ed middle school league (“Junior League”), boys high school league, and girls high school league – the only one of its kind in the United States – in addition to training centers across all five boroughs. From just 26 wrestling programs 13 years ago, today we work with 3,000 students across New York City. We have come a long way. The incredible growth of Beat the Streets would not have been possible without the support of New York City’s Public Schools Athletic League (PSAL) and the leadership provided by Eric Goldstein and Donald Douglas. The PSAL has been our strongest partner in growing the sport of wrestling and creating opportunities for our students in New York City. Together, Beat the Streets and the PSAL have transformed the wrestling landscape in New York City. As Beat the Streets has grown, so too has our potential and responsibility to positively impact our wrestlers off the mat. To fulfill this part of our mission, in 2013, we launched the T.O.P. Camp, a comprehensive summer camp that teaches our students both wrestling fundamentals and life skills such as healthy nutrition, college prep, and financial literacy. During the 2016-17 season we expanded the T.O.P. model year-round, offering monthly life skills workshops and making these opportunities accessible to more of our student-athletes. These efforts have created a deeper level of engagement with our kids and coaches and have strengthened our mission of developing the full potential of our student-athletes.

On the mat, the 2016-17 wrestling season was one for the record books. At the New York State Wrestling Championships, we had five state place-winners including Brandon Nunez, who became the first Beat the Streets wrestler to win a state title at the Division I level. In doing so, Brandon proved that a student-athlete from the city can reach the pinnacle of athletic accomplishment in our sport. In 2017 Brandon went on to pursue his athletic dreams as a member of the Rhode Island College varsity wrestling team. At Beat the Streets, we are proud of Brandon’s ability to transcend his beginnings and use wrestling to advance his education. Today, the words that I hear most often from our coaches, donors, staff, and board are the words “progress” and “respect.” While we are indeed proud of how far we have come and the respect that NYC Wrestling has earned, as wrestlers, we are always looking to do more and hope to make the 2017-18 season our best yet. On behalf of the Board of Directors, Leadership Council and the BTSNY Staff, I want to thank you for being a part of our journey and hope you will stay a part of our wrestling family for years to come.

Mike Novogratz, Chairman of the Board

My coaches motivate me to be a better wrestler, person, and role model to my teammates. Wrestling changed my life in a good way with my grades improving. I excel in my classes, and I am becoming moreÂ disciplined.

BRANDON BEGAN HIS WRESTING CAREER AS A HIGH SCHOOL FRESHMAN. HE ATTENDED OUR TRAINING CENTERS TWO TO THREE TIMES PER WEEK, AS WELL AS EVERY COMPETITION POSSIBLE. IN HIS SENIOR YEAR, HE BECAME THE FIRST PSAL WRESTLER TO WIN A DIVISION ONE STATE CHAMPIONSHIP. HE IS CURRENTLY IN HIS FIRST WRESTLING SEASON AT RHODE ISLAND COLLEGE.

Before I started wrestling at Beat the Streets, I was getting suspended numerous times in school, I got into a lot of fights, and my grades were really low. It’s really hard to get out of that if you don’t have something that’s occupying you. I think Beat the Streets has made me an all around better person. It pushes kids to be a better version of themselves. It leads them to a better future with college. Everyone does have the opportunity, they just need to take it. I want kids in the future to look at me and be like if Brandon can do it, then I can do it.

BTSNY ensures safe, fun, and quality wrestling instruction for all participants by offering resources and training to all NYC wrestling coaches throughout the year including:

There are things Zannetti said that I can immediately use to build a strong mindset for kids. Four principles that would be the kid&#39;s creed and get kids understanding what it means to be a wrestler-1. I will be thankful for the opportunity to wrestle 2. I will be aggressive and relentless 3. I will have no fear of losing or making mistakes 4. I will never give up Those four principles can build their mindset as a wrestler and as a great person as they grow up.

Wrestling made me become a stronger person both mentally and physically. I used to stress about facing obstacles in my life, but the mentality that wrestling gave me helped me lose that fear. I now go after what I want career and school-wise in a way I never would have before. As a coach, I want to create relationships and support those starting out in the sport in the same way that I was given support.

Coach Koag has been involved in NYC wrestling for the past eight years. As a BTSNY alumna, she began coaching a middle school program three years ago.

BTSNY has provided me with endless resources to help make my coaching easier. I work in a Title 1 school, which means that most of my students are from a low-income household. So BTSNY helps with wrestling shoes, headgear, uniforms, education, and character development. These are just some of the things that I donâ&amp;#x20AC;&amp;#x2122;t have to worry about, which means I can now focus on just being a coach.

Coach Webb has been involved in NYC wrestling since he wrestled for Harry S. Truman High School in the Bronx. He has been coaching in the city for the past 15 years, 10 of which were with BTSNY.

SINCE WRESTLING WITH BTSNY, SHE HAS A MORE POSITIVE ATTITUDE.

their child’s eating habits became healthier since wrestling with BTSNY

stated that wrestling challenges their child in a positive way

OFF-THE-MAT STUDENTS IN ACTION PROGRAM 40 Middle School Student-Athletes The Jefferson Awards Foundation Students In Action program seeks to develop students into leaders who will have the tools to positively impact their immediate communities and schools, as well as the larger communities around them. The program included a kick-off conference followed by community service projects implemented by each team, such as the School and Neighborhood Clean-Up completed by Eagle Academy in the Bronx.

While our wrestlers spend a lot of time in school, they aren&#39;t often given the opportunity to socialize and really expand their creativity for a good cause like they were today. Today, and the upcoming months with the project, will really teach our kids values such as selflessness, respect, and community service that will last them a lifetime.

Wrestler’s Marks: Head Up, Move Your Feet, In Position to Score

Our Wrestler’s Mark Character Development Program is designed to educate our studentathletes on how wrestling provides lessons that translate directly to their lives in the classroom, community, and family. Student-athletes learned about the Wrestler’s Mark of the day or week, and those that exhibited the traits were nominated to receive the award by their coach.

Through the Varonis Systems Inc. Internship, our recent high school graduates were able to gain real life skills, as well as insight into various departments that make up an organization. They rotated through five departments within the company including Marketing, Information Technology, Human Resources, Sales, and Finance. As a result of successful completion of the internship, each participant received a college tuition scholarship for the following school year.

WRESTLING IS ALIVE AND WELL IN THE BIG APPLE.

YOUR RESOURCES AT WORK

CIRCLE Beat the Streets is dedicated to improving the lives of New York Cityâ&amp;#x20AC;&amp;#x2122;s youth. With your support, we can realize that goal and so much more. VISIT From competitions to enrichment programs, there are many opportunities to see our impact first-hand. VOLUNTEER We are always looking for coaches and event helpers. Complete the Volunteer Interest Form on our website. DONATE As a 501 (c)(3) non-profit organization, all donations are tax-deductible and go directly to supporting our mission of helping young people through wrestling. CONNECT Like our page on Facebook, follow us on Twitter and Instagram, subscribe to our YouTube Channel, and visit our website to stay informed on Beat the Streetsâ&amp;#x20AC;&amp;#x2122; efforts. @BeatTheStreets 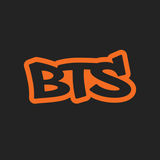