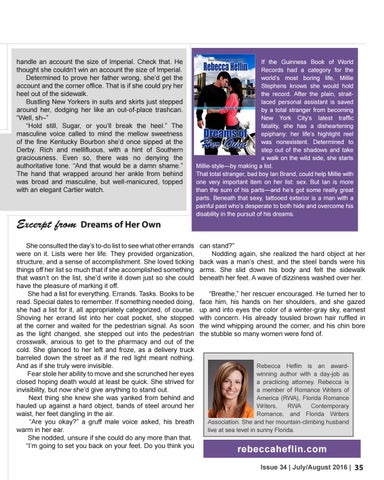 handle an account the size of Imperial. Check that. He thought she couldn’t win an account the size of Imperial. Determined to prove her father wrong, she’d get the account and the corner office. That is if she could pry her heel out of the sidewalk. Bustling New Yorkers in suits and skirts just stepped around her, dodging her like an out-of-place trashcan. “Well, sh–” “Hold still, Sugar, or you’ll break the heel.” The masculine voice called to mind the mellow sweetness of the fine Kentucky Bourbon she’d once sipped at the Derby. Rich and mellifluous, with a hint of Southern graciousness. Even so, there was no denying the authoritative tone. “And that would be a damn shame.” The hand that wrapped around her ankle from behind was broad and masculine, but well-manicured, topped with an elegant Cartier watch.

If the Guinness Book of World Records had a category for the world’s most boring life, Millie Stephens knows she would hold the record. After the plain, straitlaced personal assistant is saved by a total stranger from becoming New York City’s latest traffic fatality, she has a disheartening epiphany: her life’s highlight reel was nonexistent. Determined to step out of the shadows and take a walk on the wild side, she starts Millie-style—by making a list. That total stranger, bad boy Ian Brand, could help Millie with one very important item on her list: sex. But Ian is more than the sum of his parts—and he’s got some really great parts. Beneath that sexy, tattooed exterior is a man with a painful past who’s desperate to both hide and overcome his disability in the pursuit of his dreams.

Dreams of Her Own

She consulted the day’s to-do list to see what other errands were on it. Lists were her life. They provided organization, structure, and a sense of accomplishment. She loved ticking things off her list so much that if she accomplished something that wasn’t on the list, she’d write it down just so she could have the pleasure of marking it off. She had a list for everything. Errands. Tasks. Books to be read. Special dates to remember. If something needed doing, she had a list for it, all appropriately categorized, of course. Shoving her errand list into her coat pocket, she stopped at the corner and waited for the pedestrian signal. As soon as the light changed, she stepped out into the pedestrian crosswalk, anxious to get to the pharmacy and out of the cold. She glanced to her left and froze, as a delivery truck barreled down the street as if the red light meant nothing. And as if she truly were invisible. Fear stole her ability to move and she scrunched her eyes closed hoping death would at least be quick. She strived for invisibility, but now she’d give anything to stand out. Next thing she knew she was yanked from behind and hauled up against a hard object, bands of steel around her waist, her feet dangling in the air. “Are you okay?” a gruff male voice asked, his breath warm in her ear. She nodded, unsure if she could do any more than that. “I’m going to set you back on your feet. Do you think you

can stand?” Nodding again, she realized the hard object at her back was a man’s chest, and the steel bands were his arms. She slid down his body and felt the sidewalk beneath her feet. A wave of dizziness washed over her. “Breathe,” her rescuer encouraged. He turned her to face him, his hands on her shoulders, and she gazed up and into eyes the color of a winter-gray sky, earnest with concern. His already tousled brown hair ruffled in the wind whipping around the corner, and his chin bore the stubble so many women were fond of.

Rebecca Heflin is an awardwinning author with a day-job as a practicing attorney. Rebecca is a member of Romance Writers of America (RWA), Florida Romance Writers, RWA Contemporary Romance, and Florida Writers Association. She and her mountain-climbing husband live at sea level in sunny Florida. 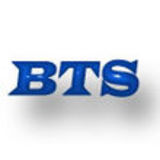