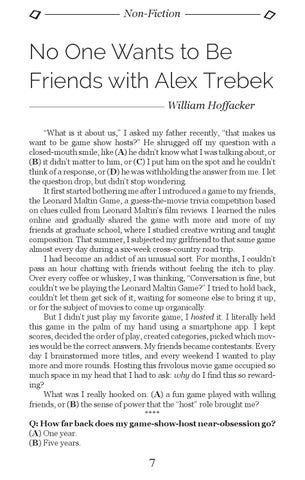 No One Wants to Be Friends with Alex Trebek William Hoffacker “What is it about us,” I asked my father recently, “that makes us want to be game show hosts?” He shrugged off my question with a closed-mouth smile, like (A) he didn’t know what I was talking about, or (B) it didn’t matter to him, or (C) I put him on the spot and he couldn’t think of a response, or (D) he was withholding the answer from me. I let the question drop, but didn’t stop wondering. It first started bothering me after I introduced a game to my friends, the Leonard Maltin Game, a guess-the-movie trivia competition based on clues culled from Leonard Maltin’s film reviews. I learned the rules online and gradually shared the game with more and more of my friends at graduate school, where I studied creative writing and taught composition. That summer, I subjected my girlfriend to that same game almost every day during a six-week cross-country road trip. I had become an addict of an unusual sort. For months, I couldn’t pass an hour chatting with friends without feeling the itch to play. Over every coffee or whiskey, I was thinking, “Conversation is fine, but couldn’t we be playing the Leonard Maltin Game?” I tried to hold back, couldn’t let them get sick of it, waiting for someone else to bring it up, or for the subject of movies to come up organically. But I didn’t just play my favorite game; I hosted it. I literally held this game in the palm of my hand using a smartphone app. I kept scores, decided the order of play, created categories, picked which movies would be the correct answers. My friends became contestants. Every day I brainstormed more titles, and every weekend I wanted to play more and more rounds. Hosting this frivolous movie game occupied so much space in my head that I had to ask: why do I find this so rewarding? What was I really hooked on: (A) a fun game played with willing friends, or (B) the sense of power that the “host” role brought me? **** Q: How far back does my game-show-host near-obsession go? (A) One year. (B) Five years.

The Fall 2014 issue of FLARE: The Flagler Review — the literary journal of Flagler College — is now online.