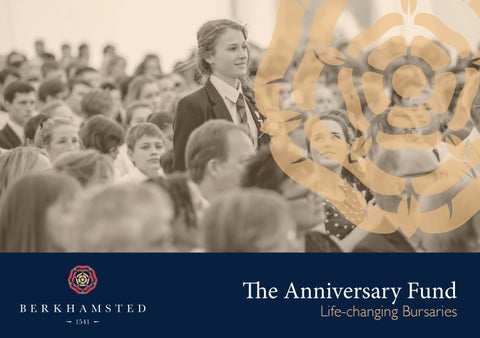 All our pupils will go out into a meritocratic world: our responsibility is to prepare them for the energy and competition they will face in their lives beyond school.

In 2041, the School will celebrate its 500th anniversary. With this milestone now on the distant horizon, it is time to consider how we measure up to the original founding values and how we should adapt and innovate to prepare our pupils for the future. One major priority stands out. We would like to provide many more free and generously discounted places to deserving students – those of high potential, who are currently held back by where they live, or by domestic circumstances, or both.

The aim: more funded places for talented and financially-deserving students.

We give bursaries already. But to make a real impact we must go beyond what our accounts will allow, and this will mean calling on the generosity of the Berkhamsted community of parents, OBs and friends. Of course, we will also continue to develop the School’s facilities as needed, but our Anniversary Fund for life-changing bursaries is the prime focus for philanthropy. Richard Backhouse Principal

...focus on our future

...why? to transform lives of deserving and talented young people held back by circumstances. to inspire our fee-paying pupils and give them an experience of the competition they can expect to face beyond school. to keep the School true to its community roots.

...for the whole school

The ambition and experience of the Anniversary Fund students will enhance what it means to be a Berkhamsted teacher and I will be delighted to welcome them into my classroom.

‘‘ ‘Aged 11, I was awarded a bursary to Berkhamsted School. My father was a postman and my mother was a school dinner lady. They could never have afforded the fees.

I came to Berkhamsted (with a scholarship and bursary) because I wanted to be challenged, and it’s definitely been good for me. Having a different background to other pupils, I have also been able to challenge them because my experience has been different to theirs. Current bursary pupil

None of this would have happened without the opportunity I was given all those years ago.’

‘My Berkhamsted bursary allowed me to grow in confidence and ability. I became Head Boy in my final year and gained a place at Edinburgh University to study Medicine and then at Harvard for postgraduate study. I am now a junior doctor thanks to Berkhamsted and the support of my steadfast mother (who was also a teacher at another school). I have a bright future thanks to Berkhamsted. I am forever grateful.’

By the time I walked out of the Lych Gate, seven and a half years later, and on to a place at Oxford University, I had been given the values that shaped my life. My education led to a career in which I have been able to change the lives of others for the better. I have also been able to afford to send my own daughter to Berkhamsted.

Only good things can come from a merit-based scholarship/bursary scheme that mutually benefits the recipients and the wider school community.

It is an incredible opportunity for those who are less privileged. I admire the school’s efforts to increase diversity. I think it is a great idea to give people a head start in life who otherwise may not have been so fortunate. Current pupils

The partnership with Berkhamsted has hugely enhanced and supported our drive to raise the aspirations and ambitions within the Denbigh community. Not only have the students involved benefited tremendously from the experiences and opportunities presented to them, but their peers have also been heavily influenced by their achievements and they too have raised their aspirations for further education. This has already inspired the year groups lower down in the school…

Bursaries also raise the aspirations of our partner schools and communities. For example, at Denbigh High School in Luton – a school from which pupils have already won Berkhamsted bursaries – general academic ambitions have risen as a result of the opportunities a few have been able to take.

Inspired by those who have won places at Berkhamsted, more Denbigh pupils are now choosing to apply for post 16 places further afield than Luton, demonstrating a huge increase in their aspirations and ambitions. We encourage all our bursary pupils to stay close to where they come from, because we believe the opportunities and self-belief that flow from bursaries can affect whole communities.

We will find candidates by developing partnerships with other schools and organisations. For instance, we have already created a partnership with Denbigh High, an 11 – 16 school in Luton. Now ambitious and able pupils at Denbigh are encouraged to put themselves forward for Berkhamsted bursaries. Moreover, we plan to develop a depth of connection where pupils receiving bursaries will return to their former schools to inspire younger pupils to apply.

Candidates sit an entrance test, for which no preparation is necessary. We also interview each candidate and give them the opportunity to participate in a group discussion with current pupils - to assess their engagement and ability to hold their own. In short, we are looking for latent potential. We are also keen to find the individuals who will not only gain great personal benefit from a Berkhamsted education but will also contribute to school life. To verify financial need we carry out rigorous meanstesting and conduct home visits (which are also important from a pastoral care point of view).

In addition to the excellent pastoral care afforded to all pupils, we have created a new role of Bursary Pupil Mentor. Along with the Heads of Houses, this teacher will focus on helping bursary pupils adjust to Berkhamsted life. They will also ensure that bursary pupils and their families are supported through school events.

Growing up in a less privileged area led me to believe that I would be restricted only to my local sixth form but Berkhamsted has allowed me to broaden my horizons and be ambitious with my future career choices. It has always been a passion of mine to break stereotypes … and this opens the doors for me to do exactly this.

by 2041 We have raised £1.1 million - almost the sum required for 2 endowed bursaries

bursary pupils as a proportion of the whole school: 4.5%

By pulling together as a community we can achieve a profound and lasting impact for the School itself and for generations of young people and their communities.

Funding bursaries into the future

A regular donation will help us fund todayâ&amp;#x20AC;&amp;#x2122;s bursary pupils - enabling us to build momentum and inspire wider confidence and belief in the scheme.

A donation towards our Endowment Fund is the way to support generations of talented young people in perpetuity.

A community of supporters

We will keep all our donors in touch with the scheme and updated on the progress of our bursary pupils. We plan to hold an annual dinner for Anniversary Fund donors, at which we will hear from those who have benefitted, and are benefitting from, the scheme. Members of the Berkhamsted community have enthusiastically supported this idea.

We aim to create a culture of support for Berkhamsted where parents, OBs and friends back our bursary scheme by giving at every level - from modest sums each month to major gifts and legacies.

Berkhamsted Schools's Group Anniversary Fund is aiming to provide more funded places for talented and financially-deserving students. Please read more to find our how we intend to raise £25 million to fund 60 bursary places by 2041, our 500th Anniversary. 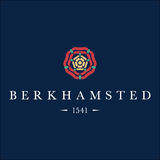