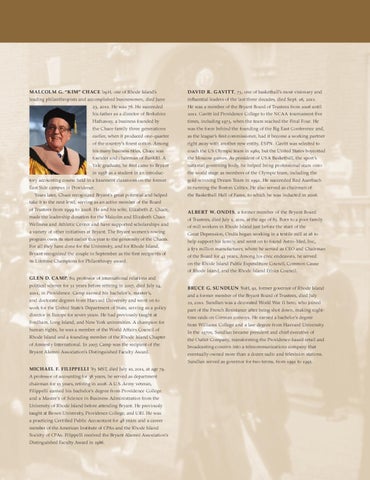 his father as a director of Berkshire

Hathaway, a business founded by

times, including 1973, when the team reached the Final Four. He

was the force behind the founding of the Big East Conference and,

earlier, when it produced one-quarter

as the league’s first commissioner, had it become a working partner

of the country’s finest cotton. Among

right away with another new entity, ESPN . Gavitt was selected to

his many business titles, Chace was

coach the US Olympic team in 1980, but the United States boycotted

founder and chairman of Bank RI. A

the Moscow games. As president of USA Basketball, the sport’s

the world stage as members of the Olympic team, including the

tory accounting course held in a basement classroom on the former

East Side campus in Providence.

in running the Boston Celtics. He also served as chairman of

the Basketball Hall of Fame, to which he was inducted in 2006.

take it to the next level, serving as an active member of the Board of Trustees from 1999 to 2008. He and his wife, Elizabeth Z . Chace, made the leadership donation for the Malcolm and Elizabeth Chace Wellness and Athletic Center and have supported scholarships and a variety of other initiatives at Bryant. The Bryant women’s rowing program owes its start earlier this year to the generosity of the Chaces. For all they have done for the University, and for Rhode Island, Bryant recognized the couple in September as the first recipients of its Lifetime Champions for Philanthropy award.

ALBERT W. ONDIS, a former member of the Bryant Board of Trustees, died July 1, 2011, at the age of 85. Born to a poor family of mill workers in Rhode Island just before the start of the Great Depression, Ondis began working in a textile mill at 16 to help support his family, and went on to found Astro-Med, Inc., a $71 million manufacturer, where he served as CEO and Chairman of the Board for 42 years. Among his civic endeavors, he served on the Rhode Island Public Expenditure Council, Common Cause of Rhode Island, and the Rhode Island Ethics Council.

GLEN D. CAMP, 80, professor of international relations and political science for 31 years before retiring in 2007, died July 14, 2011, in Providence. Camp earned his bachelor’s, master’s, and doctorate degrees from Harvard University and went on to work for the United State’s Department of State, serving as a policy director in Europe for seven years. He had previously taught at Fordham, Long Island, and New York universities. A champion for human rights, he was a member of the World Affairs Council of Rhode Island and a founding member of the Rhode Island Chapter of Amnesty International. In 2007, Camp was the recipient of the Bryant Alumni Association’s Distinguished Faculty Award.

BRUCE G. SUNDLUN ’80H, 91, former governor of Rhode Island and a former member of the Bryant Board of Trustees, died July 21, 2011. Sundlun was a decorated World War II hero, who joined part of the French Resistance after being shot down, making nighttime raids on German convoys. He earned a bachelor’s degree from Williams College and a law degree from Harvard University. In the 1970s, Sundlun became president and chief executive of the Outlet Company, transforming the Providence-based retail and broadcasting concern into a telecommunications company that eventually owned more than a dozen radio and television stations. Sundlun served as governor for two terms, from 1991 to 1995.

MICHAEL F. FILIPPELLI ’83 MST, died July 10, 2011, at age 79. A professor of accounting for 38 years, he served as department chairman for 13 years, retiring in 2008. A U.S. Army veteran, Filippelli earned his bachelor’s degree from Providence College and a Master’s of Science in Business Administration from the University of Rhode Island before attending Bryant. He previously taught at Brown University, Providence College, and URI . He was a practicing Certified Public Accountant for 48 years and a career member of the American Institute of CPA s and the Rhode Island Society of CPA s. Filippelli received the Bryant Alumni Association’s Distinguished Faculty Award in 1986. 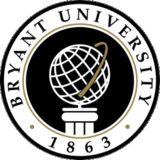 Fall 2011 edition of the Bryant Magazine

Fall 2011 edition of the Bryant Magazine