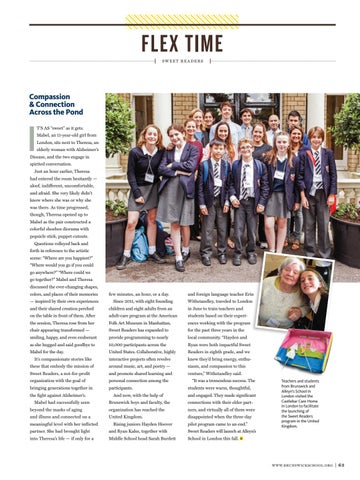 Compassion &amp; Connection Across the Pond

T’S AS “sweet” as it gets. Mabel, an 11-year-old girl from London, sits next to Theresa, an elderly woman with Alzheimer’s

Disease, and the two engage in spirited conversation. Just an hour earlier, Theresa had entered the room hesitantly — aloof, indifferent, uncomfortable, and afraid. She very likely didn’t know where she was or why she was there. As time progressed, though, Theresa opened up to Mabel as the pair constructed a colorful shoebox diorama with popsicle stick, puppet cutouts. Questions volleyed back and forth in reference to the artistic scene: “Where are you happiest?” “Where would you go if you could go anywhere?” “Where could we go together?” Mabel and Theresa discussed the ever-changing shapes, colors, and places of their memories — inspired by their own experiences

and their shared creation perched

children and eight adults from an

in June to train teachers and

on the table in front of them. After

adult-care program at the American

students based on their experi-

the session, Theresa rose from her

ences working with the program

Sweet Readers has expanded to

for the past three years in the

smiling, happy, and even exuberant

as she hugged and said goodbye to

Ryan were both impactful Sweet

Mabel for the day.

Readers in eighth grade, and we

these that embody the mission of

around music, art, and poetry —

siasm, and compassion to this

and promote shared learning and

organization with the goal of

personal connection among the

bringing generations together in

the fight against Alzheimer’s. Mabel had successfully seen

And now, with the help of

“It was a tremendous success. The students were warm, thoughtful, and engaged. They made significant

Brunswick boys and faculty, the

connections with their elder part-

beyond the masks of aging

organization has reached the

ners, and virtually all of them were

and illness and connected on a

disappointed when the three-day

meaningful level with her inflicted

pilot program came to an end.”

partner. She had brought light

and Ryan Kahn, together with

Sweet Readers will launch at Alleyn’s

into Theresa’s life — if only for a

School in London this fall.

Teachers and students from Brunswick and Alleyn’s School in London visited the Castlebar Care Home in London to facilitate the launching of the Sweet Readers program in the United Kingdom.