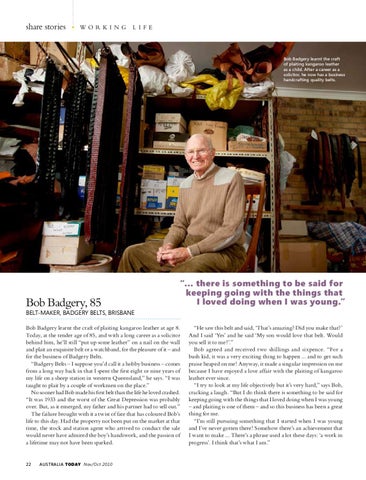 Bob Badgery learnt the craft of plaiting kangaroo leather as a child. After a career as a solicitor, he now has a business handcrafting quality belts.

“… there is something to be said for keeping going with the things that I loved doing when I was young.”

belt-maker, badgery belts, bRISBANE Bob Badgery learnt the craft of plaiting kangaroo leather at age 8. Today, at the tender age of 85, and with a long career as a solicitor behind him, he’ll still “put up some leather” on a nail on the wall and plait an exquisite belt or a watchband, for the pleasure of it – and for the business of Badgery Belts. “Badgery Belts – I suppose you’d call it a hobby business – comes from a long way back in that I spent the first eight or nine years of my life on a sheep station in western Queensland,” he says. “I was taught to plait by a couple of workmen on the place.” No sooner had Bob made his first belt than the life he loved crashed. “It was 1933 and the worst of the Great Depression was probably over. But, as it emerged, my father and his partner had to sell out.” The failure brought with it a twist of fate that has coloured Bob’s life to this day. Had the property not been put on the market at that time, the stock and station agent who arrived to conduct the sale would never have admired the boy’s handiwork, and the passion of a lifetime may not have been sparked.

“He saw this belt and said, ‘That’s amazing? Did you make that?’ And I said ‘Yes’ and he said ‘My son would love that belt. Would you sell it to me?’.” Bob agreed and received two shillings and sixpence. “For a bush kid, it was a very exciting thing to happen ... and to get such praise heaped on me! Anyway, it made a singular impression on me because I have enjoyed a love affair with the plaiting of kangaroo leather ever since. “I try to look at my life objectively but it’s very hard,” says Bob, cracking a laugh. “But I do think there is something to be said for keeping going with the things that I loved doing when I was young – and plaiting is one of them – and so this business has been a great thing for me. “I’m still pursuing something that I started when I was young and I’ve never gotten there! Somehow there’s an achievement that I want to make ... There’s a phrase used a lot these days: ‘a work in progress’. I think that’s what I am.”