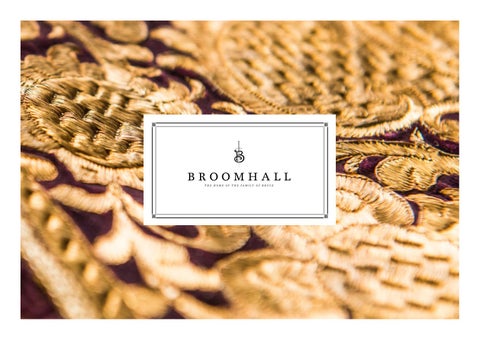 E T M E W E L C O M E Y O U T O B R O O M H A L L , home of the Family of Bruce. We are proud to have been at the centre of Scotlandâ&amp;#x20AC;&amp;#x2122;s story for over a thousand years. Ours is a fascinating history that features warriors, statesmen, inventors, explorers, entrepreneurs and patrons of the arts. As a family we have left our mark on the British Isles and further afield. My forebear Robert the Bruce was crowned King of Scots in 1306 and forged an independent kingdom. 300 years later Edward Bruce, the last Scottish ambassador to England, led the negotiations for the creation of Great Britain. Broomhall is truly the home of a family that has shaped modern Scotland and also touched the world. It has been the silent witness to the ebb and flow of great events in history. It is now available for your exclusive use. We would be delighted to host your event in our home. â&amp;#x20AC;&amp;#x201C; A N D R E W B R U C E , 37 T H C H I E F O F T H E N A M E O F B R U C E 1 1 T H E A R L O F E L G I N A N D 15 T H E A R L O F K I N C A R D I N E

The Drawing Room, hung with Old Master paintings collected by the 7th Earl of Elgin in the early 19th century. The Greek Revival plasterwork was designed by William Stark whose work includes Edinburghâ&amp;#x20AC;&amp;#x2122;s Signet Library.

O R T H E F I R S T T I M E since it was built more than 300 years ago, Broomhall – the fife home of the family of King Robert the Bruce – is available for exclusive use, for day and evening events.

Secluded in 2,500 acres of private estate, Broomhall is a secure venue for top-level events. Less than half an hour from Edinburgh’s international airport and an hour from Glasgow, the house lies only ten minutes by road from the forth bridges. The house has welcomed heads of state and government from across the world. Successive generations of britain’s royal family also have been entertained here. Yet it remains a private family home – neither hotel, nor museum – but with all the facilities of a modern venue. This new venture is a family enterprise so guests at Broomhall will enjoy the opportunity to meet members of the Bruce family who will welcome them warmly to their home and talk about its history and contents.

The Library seen from the Drawing Room. On either side of the double doors the walls are hung with paintings of classical mythology by Francesco Albani and Andrea Locatelli, and of Scottish landscapes by Alexander Nasmyth.

R O O M H A L L H O U S E was built for entertaining. Up to 150 people can gather in the reception rooms or as many as 70 can be seated comfortably for dinner. With its extraordinary fusion of grand spaces and intimate areas, Broomhall is an inspiring setting for every kind of gathering – business incentive travel, board meetings, product launches, receptions, parties and celebrations.

Guests may wish to be served in the dining room where the 10th Earl of Elgin entertained King George V and Queen Mary to lunch in 1924. Or negotiate terms for an important business deal in the library where Andrew Carnegie – then the richest man in the world – appointed the 9th Earl as chairman of his endowment fund for Scotland’s universities. Broomhall’s management staff will create events, specifically crafted to the needs of our guests. Substantial investment has modernised the house and made it fit for business today, including high-speed wireless broadband with the highest ratings of cyber security.

AT E R I N G AT B R O O M H A L L will be unsurpassed anywhere – as guests will surely expect of a household that traces its ancestry back 1,500 years to the royal families of France, Ireland and Scotland. The Broomhall cellars were world-famous long before the battle of Waterloo. Indeed successive generations of the Bruce family have drawn from their cellars to assist diplomatic missions overseas. In 1799 the 7th Earl took wine to Constantinople where he entertained the Sultan of Turkey. In 1858, to expedite Britain’s first trade treaty with Japan, the 8th Earl served champagne from Broomhall – in Tokyo! Within these walls, guests will discover food, drink and service to relish and remember forever. The very best caterers in Scotland have been retained. The staff whom they bring to Broomhall have all been thoroughly trained in the highest standards. The preparation of food will concentrate on using local produce from sustainable sources: naturally, every culinary preference and each guest’s particular taste will be fully taken care of.

The Dining Room is hung with 16th and 17th century portraits and dominated by a mantelpiece built specially for Broomhall House from the marriage bed of James VI and his Queen, Anne of Denmark.

The North Front, Broomhall House dating from 1702, but finished in 1865, when the portico was added in Aegypto-Greek style by the architect Charles Heath Wilson, a founding director of the Glasgow School of Art.

H R O U G H O U R E S TA B L I S H E D N E T WO R K of partnerships, we can make arrangements for guests to travel to Broomhall by private aircraft into Edinburgh or Glasgow International Airports. Guests can be met from the cruise ship terminal at the Port of Rosyth, or arrive and depart by helicopter. Anything is possible.

For accommodation, Broomhall guests will benefit from our secure connections with the best hotels in Scotland. Whatever the needs of your group, family or party, we will find and reserve the accommodation you want and arrange firstclass transport to match. For business support, we can also supply a full complement of services. Broomhall is situated within an hour’s drive from many of Scotland’s world-renowned golf courses – including St Andrews, Gleneagles, Carnoustie and Muirfield. Our concierge service can arrange golf tours, whisky tours and unrivalled opportunities for riding, walking, shooting, sailing, fishing, cycling, and bird-watching – all the pleasures in which Scotland excels. Edinburgh’s annual Festivals and Royal Military Tattoo are within easy reach.

TO P : Guests enjoying a tour of the Library which represents 500 years of book collecting by successive generations of the Bruce Family. It includes an early Geneva Bible belonging to Rev. Robert Bruce, one of the leading figures of the Scottish Reformation. A B OV E :

Guests entertained in the Front Hall.

R I G H T: Silver candlesticks commissioned in the 1790s and taken overseas by successive generations of the Bruce Family on diplomatic and colonial postings to Berlin, Vienna, Constantinople, Washington DC, Montreal and Calcutta.

A B OV E : An architectural drawing by John Adam for rebuilding Broomhall House in 1766, and a design for the British embassy in Constantinople by Vincenzo Balestra in 1801, based on contemporary drawings for Broomhall House by Thomas Harrison. L E F T: The children of Victor Bruce, 9th Earl of Elgin - Edward, Bobby and Alec â&amp;#x20AC;&amp;#x201C; on the terrace at Broomhall House, circa 1888.

S M U C H A S I T I S A FA M I LY H O M E , Broomhall is an intellectual statement – of active engagement with European civilisation – which has long been a characteristic of the Bruces. It has had far-reaching influence. First built in 1702 to designs by William Bruce, Broomhall was remodelled in 1766 by John Adam. Between 1796 and 1799 the house was redesigned in the Greek Revival style by Thomas Harrison. In 1799, the 7 th Earl was appointed ambassador to the Ottoman Empire. In Constantinople, he commissioned the first purpose-built British embassy in the world and modelled that building on the plans for Broomhall.

Broomhall’s Greek Revival style influenced Edinburgh’s public architecture in the early nineteenth century. It was the 7th Earl who originally coined the phrase, “Athens of the North” for Edinburgh. Many of Scotland’s outstanding artists, such as Ramsay, Raeburn and Wilkie, have painted the Bruce family. The picture collection at Broomhall also contains portraits by the Dutch painter Jan Mytens, and Old Masters collected by the 7th Earl.

Broomhall House from the North West â&amp;#x20AC;&amp;#x201C; a spectacular point of arrival. The approach to the house was realigned in 2016 and now follows the direction of the original eighteenth century carriage drive which was altered in 1865.

A B OV E : The Sword of Robert the Bruce, King of Scots, (1306-1329) given by his son David II to Thomas Bruce of Clackmannan and passed by succession to each Chief of the Name of Bruce. L E F T: A tartan jacket and waistcoat dating from 1760â&amp;#x20AC;&amp;#x2122;s made for James Bruce of Kinnaird who discovered the source of the Blue Nile in 1770. The tartan is Bruce of Kinnaird, woven from linen and silk twill.

Successive generations of the Bruce family have served as statesmen, diplomats, explorers, inventors and entrepreneurs. The 5th Earl was a leading figure of the Scottish Enlightenment and a founder member of the Royal and Ancient Golf Club. His kinsman James Bruce discovered the source of the Blue Nile in 1770. Bruces served the British Empire as governors, Viceroys and pro-consuls. The 8th Earl introduced parliamentary democracy to Canada and later negotiated treaties with Japan and China. He was the first Viceroy of India to be appointed by the Crown. The 9th Earl followed his father to India as Viceroy where he built over 4,000 miles of railway line. The Bruce family has been at the heart of Scotland’s story for over 1,000 years.

Let them welcome you to Broomhall.

f you would like to know how we can help you plan an exclusive event at Broomhall House – whether that be for corporate events and team building, for product launches or film location or for private celebrations – please feel free to contact us directly at: enquire@broomhallhouse.com

Embroidered saddle: a gift of Selim III, Sultan of Turkey to the 7th Earl of Elgin, 1801.

Broomhall House is truly the home of a family that has shaped modern Scotland and also touched the world. It has been the silent witness to the ebb and flow of great events in history. It is now available for your exclusive use. We would be delighted to host your event in our home. 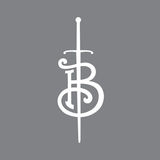