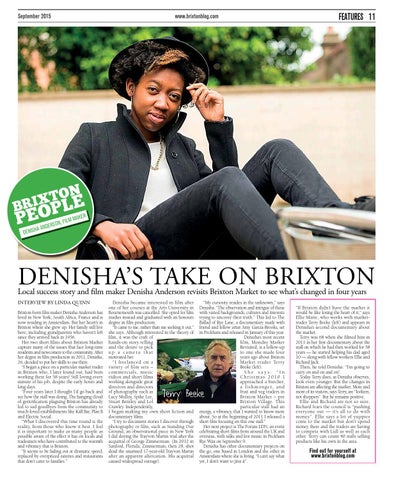 Local success story and film maker Denisha Anderson revisits Brixton Market to see what’s changed in four years INTERVIEW BY LINDA QUINN Brixton-born film maker Denisha Anderson has lived in New York, South Africa, France and is now residing in Amsterdam. But her heart’s in Brixton where she grew up. Her family still live here, including grandparents who haven’t left since they arrived back in 1956. Her two short films about Brixton Market capture many of the issues that face long-time residents and newcomers to the community. After her degree in film production in 2011, Denisha, 26, decided to put her skills to use there. “I began a piece on a particular market trader in Brixton who, I later found out, had been working there for 58 years! Still loving every minute of his job, despite the early hours and long days. “Four years later I thought I’d go back and see how the stall was doing. The hanging cloud of gentrification plaguing Brixton has already led to sad goodbyes from the community to much-loved establishments like Kaff Bar, Plan B and Electric Social. “What I discovered this time round is the reality, from those who know it best. I feel it is important to make as many people as possible aware of the effect it has on locals and tradesmen who have contributed to the warmth and vibrancy that is Brixton. “It seems to be fading out at dramatic speed, replaced by overpriced eateries and restaurants that don’t cater to families.”

Denisha became interested in film after one of her courses at the Arts University in Bournemouth was cancelled. She opted for film studies instead and graduated with an honours degree in film production. “It came to me, rather than me seeking it out,” she says. Although interested in the theory of film, it was the craft of hands-on story telling and the desire to pick up a camera that motivated her. “I freelanced on a variety of film sets – commercials, music videos and short films working alongside great directors and directors of photography such as Lucy Mulloy, Spike Lee, Stuart Bentley and Lol Crawley. Independently, I began making my own short fiction and documentary films. “I try to document stories I discover through photography or film, such as Standing Our Ground, an observational piece in New York I did during the Trayvon Martin trial after the acquittal of George Zimmerman. (In 2012 in Sanford, Florida, Zimmerman, then 28, shot dead the unarmed 17-year-old Trayvon Martin after an apparent altercation. His acquittal caused widespread outrage).

“My curiosity resides in the unknown,” says Denisha. “The observation and intrigue of those with varied backgrounds, cultures and interests trying to uncover their truth.” This led to The Ballad of Rye Lane, a documentary made with friend and fellow artist Amy Garcia-Brooks, set in Peckham and released in January of this year. Denisha’s most recent film, Monday Market Revisited, is a follow-up to one she made four years ago about Brixton Market trader Terry Beeke (left). She says: “In Christmas 2010 I approached a butcher, a f i s h m o n g e r, a n d fruit and veg traders in Brixton Market – pre Brixton Village. This particular stall had an energy, a vibrancy, that I wanted to know more about. So at the beginning of 2011 I released a short film focusing on this one stall.” Her next project is The Forum LDN, an event celebrating short films from around the UK and overseas, with talks and live music in Peckham Rye Wax on September 9. Denisha has other documentary projects on the go, one based in London and the other in Amsterdam where she is living. “I can’t say what yet, I don’t want to jinx it”.

“If Brixton didn’t have the market it would be like losing the heart of it,” says Ellie Marie, who works with markettrader Terry Beeke (left) and appears in Denisha’s second documentary about the market. Terry was 68 when she filmed him in 2011 in her first documentary about the stall on which he had then worked for 58 years — he started helping his dad aged 10 — along with fellow workers Ellie and Richard Jack. Then, he told Denisha: “I’m going to carry on and on and on”. Today Terry does, as Denisha observes, look even younger. But the changes in Brixton are affecting the market. More and more of its visitors, says Terry, are “lookers, not shoppers”. But he remains positive. Ellie and Richard are not so sure. Richard fears the council is “pushing everyone out — it’s all to do with money”. Ellie says a lot of yuppies come to the market but don’t spend money there and the traders are having to compete with Lidl as well as each other. Terry can count 40 stalls selling products like his own in the area.

Find out for yourself at■ www.brixtonblog.com 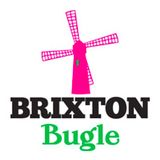