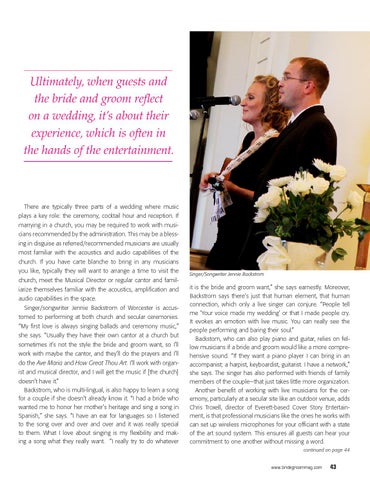 Ultimately, when guests and the bride and groom reflect on a wedding, it’s about their experience, which is often in the hands of the entertainment.

There are typically three parts of a wedding where music plays a key role: the ceremony, cocktail hour and reception. If marrying in a church, you may be required to work with musicians recommended by the administration. This may be a blessing in disguise as referred/recommended musicians are usually most familiar with the acoustics and audio capabilities of the church. If you have carte blanche to bring in any musicians you like, typically they will want to arrange a time to visit the church, meet the Musical Director or regular cantor and familiarize themselves familiar with the acoustics, amplification and audio capabilities in the space. Singer/songwriter Jennie Backstrom of Worcester is accustomed to performing at both church and secular ceremonies. “My first love is always singing ballads and ceremony music,” she says. “Usually they have their own cantor at a church but sometimes it’s not the style the bride and groom want, so I’ll work with maybe the cantor, and they’ll do the prayers and I’ll do the Ave Maria and How Great Thou Art. I’ll work with organist and musical director, and I will get the music if [the church] doesn’t have it.” Backstrom, who is multi-lingual, is also happy to learn a song for a couple if she doesn’t already know it. “I had a bride who wanted me to honor her mother’s heritage and sing a song in Spanish,” she says. “I have an ear for languages so I listened to the song over and over and over and it was really special to them. What I love about singing is my flexibility and making a song what they really want. “I really try to do whatever

it is the bride and groom want,” she says earnestly. Moreover, Backstrom says there’s just that human element, that human connection, which only a live singer can conjure. “People tell me ‘Your voice made my wedding’ or that I made people cry. It evokes an emotion with live music. You can really see the people performing and baring their soul.” Backstom, who can also play piano and guitar, relies on fellow musicians if a bride and groom would like a more comprehensive sound. “If they want a piano player I can bring in an accompanist; a harpist, keyboardist, guitarist. I have a network,” she says. The singer has also performed with friends of family members of the couple—that just takes little more organization. Another benefit of working with live musicians for the ceremony, particularly at a secular site like an outdoor venue, adds Chris Troxell, director of Everett-based Cover Story Entertainment, is that professional musicians like the ones he works with can set up wireless microphones for your officiant with a state of the art sound system. This ensures all guests can hear your commitment to one another without missing a word. continued on page 44 www.bridegroommag.com 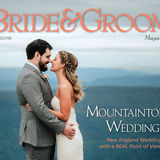