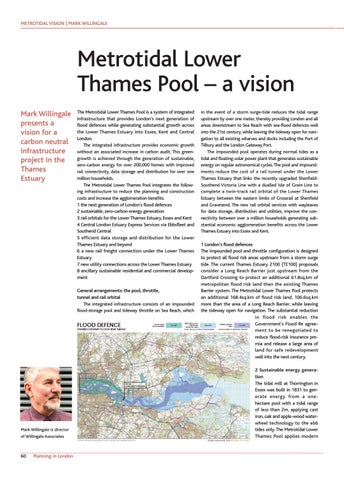 in the event of a storm surge-tide reduces the tidal range upstream by over one meter, thereby providing London and all areas downstream to Sea Reach with sea-flood defences well into the 21st century, while leaving the tideway open for navigation to all existing wharves and docks including the Port of Tilbury and the London Gateway Port. The impounded pool operates during normal tides as a tidal and floating-solar power plant that generates sustainable energy on regular astronomical cycles. The pool and impoundments reduce the cost of a rail tunnel under the Lower Thames Estuary that links the recently upgraded ShenfieldSouthend Victoria Line with a dualled Isle of Grain Line to complete a twin-track rail orbital of the Lower Thames Estuary between the eastern limbs of Crossrail at Shenfield and Gravesend. The new rail orbital services with wayleaves for data storage, distribution and utilities, improve the connectivity between over a million households generating substantial economic agglomeration benefits across the Lower Thames Estuary into Essex and Kent.

1 London’s flood defences The impounded pool and throttle configuration is designed to protect all flood risk areas upstream from a storm surge tide. The current Thames Estuary 2100 (TE100) proposals consider a Long Reach Barrier just upstream from the Dartford Crossing to protect an additional 61.8sq.km of metropolitan flood risk land than the existing Thames Barrier system. The Metrotidal Lower Thames Pool protects an additional 168.4sq.km of flood risk land, 106.6sq.km more than the area of a Long Reach Barrier, while leaving the tideway open for navigation. The substantial reduction in flood risk enables the Government’s Flood Re agreement to be renegotiated to reduce flood-risk insurance premia and release a large area of land for safe redevelopment well into the next century. 2 Sustainable energy generation The tidal mill at Thorrington in Essex was built in 1831 to generate energy from a onehectare pool with a tidal range of less than 2m, applying cast iron, oak and apple-wood waterwheel technology to the ebb tides only. The Metrotidal Lower Thames Pool applies modern