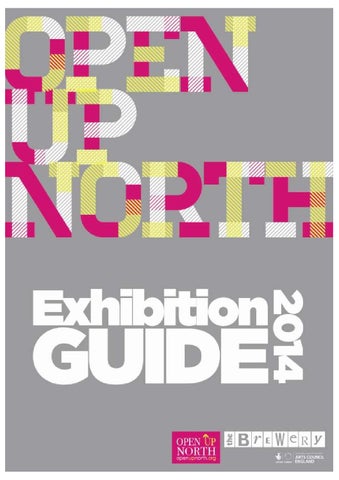 Introduction Welcome to Open Up North 2014. This exhibition is a highpoint of the Brewery’s Visual Arts calendar. Through it the arts centre develops relationships with artists from across the North of England; forging links which have in the past led to new commissions and exhibition opportunities. We look forward to establishing exciting relationships with OUN artists in the future. The Brewery has for a number of years sought to work with emerging artists to develop their practice. Open Up North 2014 has provided a platform to expand this work and to support over thirty emerging artists with a programme of professional development sessions, in partnership with Castlefield Gallery, over the coming year. Additionally three emerging artists will embark on a year of in depth professional development and mentoring with the Brewery and Castlefield, culminating in an exhibition of their latest work in summer 2015. We are particularly indebted to the Esmée Fairbairn Foundation for supporting this programme. Among the many organisations and individuals we should mention, special thanks must be extended to Lakeland Arts and Kendal College for providing venues for Open Up North 2014. This exhibition is a further example of how organisations in South Lakeland achieve outstanding cultural opportunities through partnership and co-operation. Thank you for coming to Open Up North. Don’t forget that much of the work on display is for sale and your purchases support the careers of artists and help the Brewery to develop its free visual arts programme. Most of all enjoy the show. Richard Foster Chief Executive Officer and Artistic Director.

Judges Helen Watson Director Exhibitions &amp; Collections, Lakeland Arts Helen Watson joined Lakeland Arts in July 2008. In her role as Director Exhibitions &amp; Collections she is responsible for care, display and conservation of all the Trust’s collections and the overall direction of the ambitious and nationally recognised exhibition and display programme. Lakeland Arts runs Abbot Hall Art Gallery, Blackwell The Arts &amp; Crafts House, Museum of Lakeland Life &amp; Industry and the currently closed for redevelopment Windermere Steam Boat Museum. Previously Helen was the Deputy Head of Education at the National Galleries of Scotland and Curator at Scarborough Art Gallery. She has a MA in Museum Studies and is an Associate of the Museums Association.

Estelle Lovatt is a trained painter and art historian turned freelance art critic. An experienced broadcaster, she regularly appears on BBC Radio and TV, Sky News &amp; Channel 4 News. As a writer Estelle’s work has appeared in national media and in specialised arts press, exhibition catalogues and artists’ books. An experienced judge, Estelle was on the panel for the ING Discerning Eye competition in 2013. Estelle has experience of being on both sides of the canvas, having won prizes for her own artwork, including the Stowells Trophy Award exhibition at the Royal Academy. Estelle also lectures at the Hampstead School of Art, London. Twitter @EstelleLovatt, Facebook: EstelleLovattArtCritic

Iain Andrews The Duke and Duchess of Torquemada

Fiona Alderson Plains of Heaven Under Snow Acrylic on canvas

Sonja Andrew The Ties That Bind (I) Mixed media

Iain Andrews The Duke and Duchess of Torquemada Acrylic on canvas

Will Barton Stormwold Acrylic on canvas

John Birch Yucca and Orchid Acrylic on board

Alanna Brown Some Things Can Be Mended Mixed media

Derek Eland In Our Own Words, Afghanistan Digital C Print

Pete Flowers Petals are the Tears of Buddha Oil on canvas

Liz Ford After the Flood Oil on canvas

Beth Kettel The Point’s Potential or What’s the Point? Video

Benjamin McLeod Embankment and the Bay II Oil on canvas

Eva Ullrich Harris Oil on board

We would like to thank the following people who have contributed to the success of Open Up North: Open Up North Team Richard Foster, CEO/Artistic Director Jamie Barnes, Curator James Ducker, Marketing &amp; Admin Paul Singleton, Development

Funding for the Emerging Artist Programme:

Information on the prize winners, artists in the exhibition, judges and the competition.