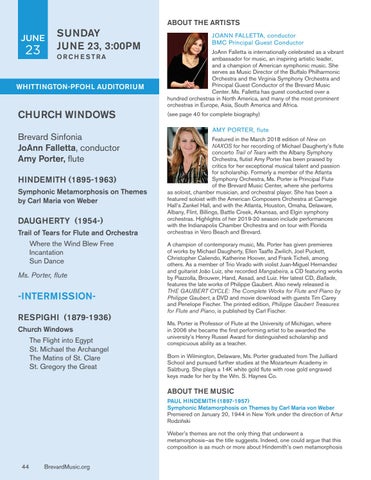 -INTERMISSIONRESPIGHI (1879-1936) Church Windows The Flight into Egypt St. Michael the Archangel The Matins of St. Clare St. Gregory the Great

ABOUT THE ARTISTS JOANN FALLETTA, conductor BMC Principal Guest Conductor JoAnn Falletta is internationally celebrated as a vibrant ambassador for music, an inspiring artistic leader, and a champion of American symphonic music. She serves as Music Director of the Buffalo Philharmonic Orchestra and the Virginia Symphony Orchestra and Principal Guest Conductor of the Brevard Music Center. Ms. Falletta has guest conducted over a hundred orchestras in North America, and many of the most prominent orchestras in Europe, Asia, South America and Africa. (see page 40 for complete biography)

AMY PORTER, flute Featured in the March 2018 edition of New on NAXOS for her recording of Michael Daugherty’s flute concerto Trail of Tears with the Albany Symphony Orchestra, flutist Amy Porter has been praised by critics for her exceptional musical talent and passion for scholarship. Formerly a member of the Atlanta Symphony Orchestra, Ms. Porter is Principal Flute of the Brevard Music Center, where she performs as soloist, chamber musician, and orchestral player. She has been a featured soloist with the American Composers Orchestra at Carnegie Hall’s Zankel Hall, and with the Atlanta, Houston, Omaha, Delaware, Albany, Flint, Billings, Battle Creek, Arkansas, and Elgin symphony orchestras. Highlights of her 2019-20 season include performances with the Indianapolis Chamber Orchestra and on tour with Florida orchestras in Vero Beach and Brevard. A champion of contemporary music, Ms. Porter has given premieres of works by Michael Daugherty, Ellen Taaffe Zwilich, Joel Puckett, Christopher Caliendo, Katherine Hoover, and Frank Ticheli, among others. As a member of Trio Virado with violist Juan-Miguel Hernandez and guitarist João Luiz, she recorded Mangabeira, a CD featuring works by Piazzolla, Brouwer, Hand, Assad, and Luiz. Her latest CD, Ballade, features the late works of Philippe Gaubert. Also newly released is THE GAUBERT CYCLE: The Complete Works for Flute and Piano by Philippe Gaubert, a DVD and movie download with guests Tim Carey and Penelope Fischer. The printed edition, Philippe Gaubert Treasures for Flute and Piano, is published by Carl Fischer. Ms. Porter is Professor of Flute at the University of Michigan, where in 2006 she became the first performing artist to be awarded the university’s Henry Russel Award for distinguished scholarship and conspicuous ability as a teacher. Born in Wilmington, Delaware, Ms. Porter graduated from The Juilliard School and pursued further studies at the Mozarteum Academy in Salzburg. She plays a 14K white gold flute with rose gold engraved keys made for her by the Wm. S. Haynes Co.

ABOUT THE MUSIC PAUL HINDEMITH (1897-1957) Symphonic Metamorphosis on Themes by Carl Maria von Weber Premiered on January 20, 1944 in New York under the direction of Artur Rodziński Weber’s themes are not the only thing that underwent a metamorphosis—as the title suggests. Indeed, one could argue that this composition is as much or more about Hindemith’s own metamorphosis 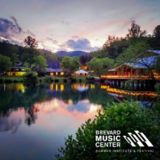