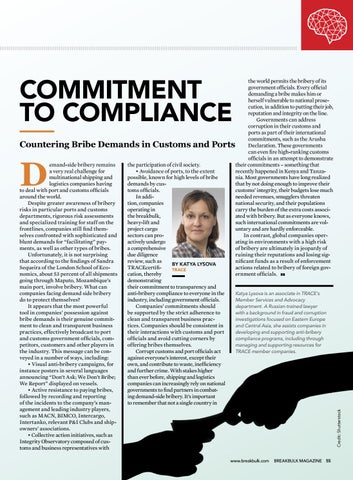 the world permits the bribery of its government officials. Every official demanding a bribe makes him or herself vulnerable to national prosecution, in addition to putting their job, reputation and integrity on the line. Governments can address corruption in their customs and ports as part of their international commitments, such as the Arusha Countering Bribe Demands in Customs and Ports Declaration. These governments can even fire high-ranking customs officials in an attempt to demonstrate emand-side bribery remains the participation of civil society. their commitments – something that a very real challenge for • Avoidance of ports, to the extent recently happened in Kenya and Tanzamultinational shipping and possible, known for high levels of bribe nia. Most governments have long realized logistics companies having demands by custhat by not doing enough to improve their to deal with port and customs officials toms officials. customs’ integrity, their budgets lose much around the world. In addineeded revenues, smugglers threaten Despite greater awareness of bribery tion, companies national security, and their populations risks in particular ports and customs operating in carry the burden of the extra costs associdepartments, rigorous risk assessments the breakbulk, ated with bribery. But as everyone knows, and specialized training for staff on the heavy-lift and such international commitments are volfrontlines, companies still find themproject cargo untary and are hardly enforceable. selves confronted with sophisticated and sectors can proIn contrast, global companies operblunt demands for “facilitating” payactively undergo ating in environments with a high risk ments, as well as other types of bribes. a comprehensive of bribery are ultimately in jeopardy of Unfortunately, it is not surprising due diligence ruining their reputations and losing sigthat according to the findings of Sandra review, such as nificant funds as a result of enforcement BY KATYA LYSOVA Sequeira of the London School of EcoTRACEcertifiactions related to bribery of foreign govTRACE nomics, about 53 percent of all shipments cation, thereby ernment officials. BB going through Maputo, Mozambique’s demonstrating main port, involve bribery. What can their commitment to transparency and companies facing demand side bribery anti-bribery compliance to everyone in the Katya Lysova is an associate in TRACE’s do to protect themselves? industry, including government officials. Member Services and Advocacy It appears that the most powerful Companies’ commitments should department. A Russian-trained lawyer tool in companies’ possession against be supported by the strict adherence to with a background in fraud and corruption bribe demands is their genuine commitclean and transparent business pracinvestigations focused on Eastern Europe ment to clean and transparent business tices. Companies should be consistent in and Central Asia, she assists companies in practices, effectively broadcast to port their interactions with customs and port developing and supporting anti-bribery and customs government officials, comofficials and avoid cutting corners by compliance programs, including through petitors, customers and other players in offering bribes themselves. managing and supporting resources for the industry. This message can be conCorrupt customs and port officials act TRACE member companies. veyed in a number of ways, including: against everyone’s interest, except their • Visual anti-bribery campaigns, for own, and contribute to waste, inefficiency instance posters in several languages and further crime. With stakes higher announcing “Don’t Ask; We Don’t Bribe; than ever before, shipping and logistics We Report” displayed on vessels. companies can increasingly rely on national • Active resistance to paying bribes, governments to find partners in combatfollowed by recording and reporting ing demand-side bribery. It’s important of the incidents to the company’s manto remember that not a single country in agement and leading industry players, such as MACN, BIMCO, Intercargo, Intertanko, relevant P&amp;I Clubs and shipowners’ associations. • Collective action initiatives, such as Integrity Observatory composed of customs and business representatives with www.breakbulk.com  BREAKBULK MAGAZINE  55 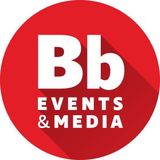