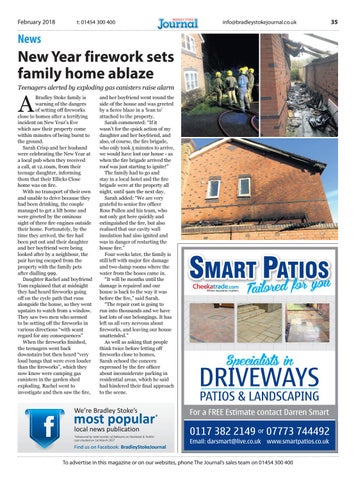 Bradley Stoke family is warning of the dangers of setting off fireworks close to homes after a terrifying incident on New Year’s Eve which saw their property come within minutes of being burnt to the ground. Sarah Crisp and her husband were celebrating the New Year at a local pub when they received a call, at 12.10am, from their teenage daughter, informing them that their Ellicks Close home was on fire. With no transport of their own and unable to drive because they had been drinking, the couple managed to get a lift home and were greeted by the ominous sight of three fire engines outside their home. Fortunately, by the time they arrived, the fire had been put out and their daughter and her boyfriend were being looked after by a neighbour, the pair having escaped from the property with the family pets after dialling 999. Daughter Rachel and boyfriend Tom explained that at midnight they had heard fireworks going off on the cycle path that runs alongside the house, so they went upstairs to watch from a window. They saw two men who seemed to be setting off the fireworks in various directions “with scant regard for any consequences” When the fireworks finished, the teenagers went back downstairs but then heard “very loud bangs that were even louder than the fireworks”, which they now know were camping gas canisters in the garden shed exploding. Rachel went to investigate and then saw the fire,

and her boyfriend went round the side of the house and was greeted by a fierce blaze in a ‘lean to’ attached to the property. Sarah commented: “If it wasn’t for the quick action of my daughter and her boyfriend, and also, of course, the fire brigade, who only took 5 minutes to arrive, we would have lost our house - as when the fire brigade arrived the roof was just starting to ignite!” The family had to go and stay in a local hotel and the fire brigade were at the property all night, until 9am the next day. Sarah added: “We are very grateful to senior fire officer Ross Pullen and his team, who not only got here quickly and extinguished the fire, but also realised that our cavity wall insulation had also ignited and was in danger of restarting the house fire.” Four weeks later, the family is still left with major fire damage and two damp rooms where the water from the hoses came in. “It will be months until the damage is repaired and our house is back to the way it was before the fire,” said Sarah. “The repair cost is going to run into thousands and we have lost lots of our belongings. It has left us all very nervous about fireworks, and leaving our house unattended.” As well as asking that people think twice before letting off fireworks close to homes, Sarah echoed the concern expressed by the fire officer about inconsiderate parking in residential areas, which he said had hindered their final approach to the scene. 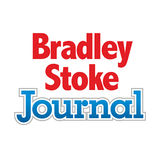