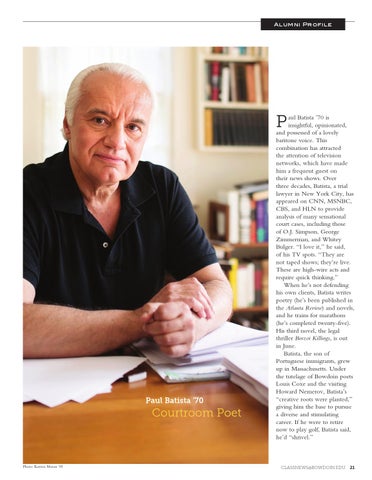 aul Batista ’70 is insightful, opinionated, and possessed of a lovely baritone voice. This combination has attracted the attention of television networks, which have made him a frequent guest on their news shows. Over three decades, Batista, a trial lawyer in New York City, has appeared on CNN, MSNBC, CBS, and HLN to provide analysis of many sensational court cases, including those of O.J. Simpson, George Zimmerman, and Whitey Bulger. “I love it,” he said, of his TV spots. “They are not taped shows; they’re live. These are high-wire acts and require quick thinking.” When he’s not defending his own clients, Batista writes poetry (he’s been published in the Atlanta Review) and novels, and he trains for marathons (he’s completed twenty-five). His third novel, the legal thriller Borzoi Killings, is out in June. Batista, the son of Portuguese immigrants, grew up in Massachusetts. Under the tutelage of Bowdoin poets Louis Coxe and the visiting Howard Nemerov, Batista’s “creative roots were planted,” giving him the base to pursue a diverse and stimulating career. If he were to retire now to play golf, Batista said, he’d “shrivel.” 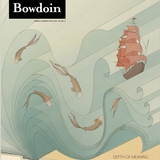