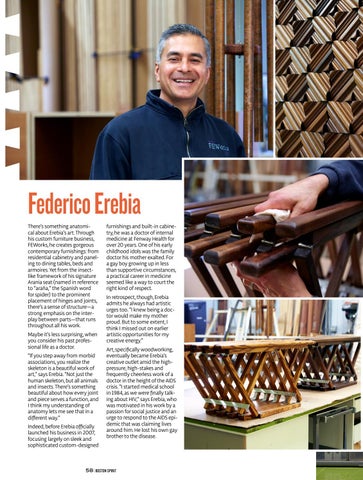 Federico Erebia There’s something anatomical about Erebia’s art. Through his custom furniture business, FEWorks, he creates gorgeous contemporary furnishings: from residential cabinetry and paneling to dining tables, beds and armoires. Yet from the insectlike framework of his signature Arania seat (named in reference to “araña,” the Spanish word for spider) to the prominent placement of hinges and joints, there’s a sense of structure—a strong emphasis on the interplay between parts—that runs throughout all his work. Maybe it’s less surprising, when you consider his past professional life as a doctor. “If you step away from morbid associations, you realize the skeleton is a beautiful work of art,” says Erebia. “Not just the human skeleton, but all animals and insects. There’s something beautiful about how every joint and piece serves a function, and I think my understanding of anatomy lets me see that in a different way.” Indeed, before Erebia officially launched his business in 2007, focusing largely on sleek and sophisticated custom-designed

furnishings and built-in cabinetry, he was a doctor of internal medicine at Fenway Health for over 20 years. One of his early childhood idols was the family doctor his mother exalted. For a gay boy growing up in less than supportive circumstances, a practical career in medicine seemed like a way to court the right kind of respect. In retrospect, though, Erebia admits he always had artistic urges too. “I knew being a doctor would make my mother proud. But to some extent, I think I missed out on earlier artistic opportunities for my creative energy.” Art, specifically woodworking, eventually became Erebia’s creative outlet amid the highpressure, high-stakes and frequently cheerless work of a doctor in the height of the AIDS crisis. “I started medical school in 1984, as we were finally talking about HIV,” says Erebia, who was motivated in his work by a passion for social justice and an urge to respond to the AIDS epidemic that was claiming lives around him. He lost his own gay brother to the disease.