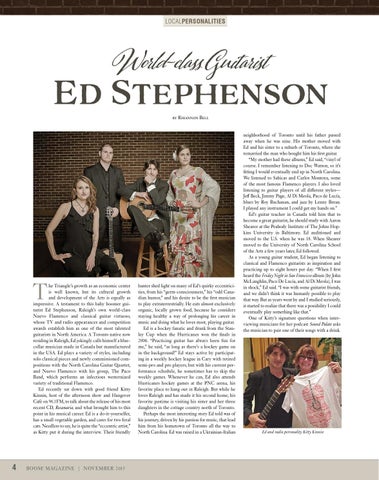 he Triangle’s growth as an economic center is well known, but its cultural growth and development of the Arts is equally as impressive. A testament to this baby boomer guitarist Ed Stephenson, Raleigh’s own world-class Nuevo Flamenco and classical guitar virtuoso, whose TV and radio appearances and competition awards establish him as one of the most talented guitarists in North America. A Toronto native now residing in Raleigh, Ed jokingly calls himself a bluecollar musician made in Canada but manufactured in the USA. Ed plays a variety of styles, including solo classical pieces and newly commissioned compositions with the North Carolina Guitar Quartet, and Nuevo Flamenco with his group, The Paco Band, which performs an infectious westernized variety of traditional Flamenco. Ed recently sat down with good friend Kitty Kinnin, host of the afternoon show and Hangover Café on 96.1FM, to talk about the release of his most recent CD, Rosamaria, and what brought him to this point in his musical career. Ed is a do-it-yourselfer, has a small vegetable garden, and cares for two feral cats. Needless to say, he is quite the “eccentric artist,” as Kitty put it during the interview. Their friendly

banter shed light on many of Ed’s quirky eccentricities, from his “germ-consciousness,” his “odd Canadian humor,” and his desire to be the first musician to play extraterrestrially. He eats almost exclusively organic, locally grown food, because he considers staying healthy a way of prolonging his career in music and doing what he loves most, playing guitar. Ed is a hockey fanatic and drank from the Stanley Cup when the Hurricanes won the finals in 2006. “Practicing guitar has always been fun for me,” he said, “as long as there’s a hockey game on in the background!” Ed stays active by participating in a weekly hockey league in Cary with retired semi-pro and pro players; but with his current performance schedule, he sometimes has to skip the weekly games. Whenever he can, Ed also attends Hurricanes hockey games at the PNC arena, his favorite place to hang out in Raleigh. But while he loves Raleigh and has made it his second home, his favorite pastime is visiting his sister and her three daughters in the cottage country north of Toronto. Perhaps the most interesting story Ed told was of his journey, driven by his passion for music, that lead him from his hometown of Toronto all the way to North Carolina. Ed was raised in a Ukrainian-Italian

neighborhood of Toronto until his father passed away when he was nine. His mother moved with Ed and his sister to a suburb of Toronto, where she remarried the man who bought him his first guitar. “My mother had these albums,” Ed said, “vinyl of course. I remember listening to Doc Watson, so it’s fitting I would eventually end up in North Carolina. We listened to Sabicas and Carlos Montoya, some of the most famous Flamenco players. I also loved listening to guitar players of all different styles— Jeff Beck, Jimmy Page, Al Di Meola, Paco de Lucía, blues by Roy Buchanan, and jazz by Lenny Breau. I played any instrument I could get my hands on.” Ed’s guitar teacher in Canada told him that to become a great guitarist, he should study with Aaron Shearer at the Peabody Institute of The Johns Hopkins University in Baltimore. Ed auditioned and moved to the U.S. when he was 18. When Shearer moved to the University of North Carolina School of the Arts a few years later, Ed followed. As a young guitar student, Ed began listening to classical and Flamenco guitarists as inspiration and practicing up to eight hours per day. “When I first heard the Friday Night in San Francisco album (by John McLaughlin, Paco De Lucia, and Al Di Meola), I was in shock,” Ed said. “I was with some guitarist friends, and we didn’t think it was humanly possible to play that way. But as years went by and I studied seriously, it started to realize that there was a possibility I could eventually play something like that.” One of Kitty’s signature questions when interviewing musicians for her podcast Sound Palate asks the musician to pair one of their songs with a drink.

We interview Raleigh's own world-class guitarist Ed Stephenson for our November column of Triangle Profiles. Learn how to decorate for the Holidays from interior designer Diane Makgill and follow Irregardless' Anya Gordon's advice and take some time for tea. Our health and wellness guru, Anne Barrington, continues her New Year, New You series with tips for November as well as talks of the perils of Drinking to your Health. Super-organizer Barbara Hemphill tells us more tips on getting organized and our resident financial adviser Gerald Townsend give us a few pointers on teaching our kids how to save. Lastly in finance, a few tips on figuring out whether a reverse mortgage is right for you or your parents. Enjoy! 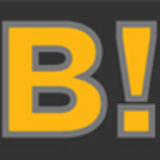