The Dog of the South Program 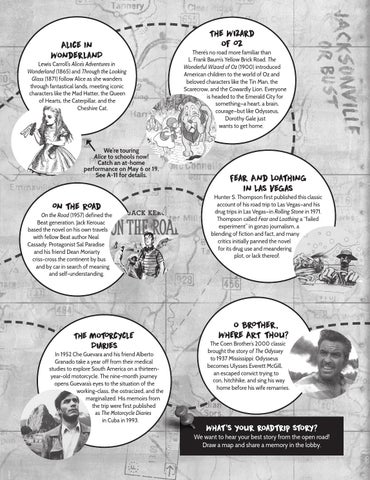 Alice In WonderlanD Lewis Carroll’s Alice’s Adventures in Wonderland (1865) and Through the Looking Glass (1871) follow Alice as she wanders through fantastical lands, meeting iconic characters like the Mad Hatter, the Queen of Hearts, the Caterpillar, and the Cheshire Cat.

We’re touring Alice to schools now! Catch an at-home performance on May 6 or 19. See A-11 for details.

On the ROad On the Road (1957) defined the Beat generation. Jack Kerouac based the novel on his own travels with fellow Beat author Neal Cassady. Protagonist Sal Paradise and his friend Dean Moriarty criss-cross the continent by bus and by car in search of meaning and self-understanding.

The MotOrcyClE DiarIes In 1952 Che Guevara and his friend Alberto Granado take a year off from their medical studies to explore South America on a thirteenyear-old motorcycle. The nine-month journey opens Guevara’s eyes to the situation of the working-class, the ostracized, and the marginalized. His memoirs from the trip were first published as The Motorcycle Diaries in Cuba in 1993.

The Wizard of Oz There’s no road more familiar than L. Frank Baum’s Yellow Brick Road. The Wonderful Wizard of Oz (1900) introduced American children to the world of Oz and beloved characters like the Tin Man, the Scarecrow, and the Cowardly Lion. Everyone is headed to the Emerald City for something—a heart, a brain, courage—but like Odysseus, Dorothy Gale just wants to get home.

Fear And Loathing In Las Vegas Hunter S. Thompson first published this classic account of his road trip to Las Vegas—and his drug trips in Las Vegas—in Rolling Stone in 1971. Thompson called Fear and Loathing a “failed experiment” in gonzo journalism, a blending of fiction and fact, and many critics initially panned the novel for its drug use and meandering plot, or lack thereof.

o BrOther, WhEre ART thou? The Coen Brother’s 2000 classic brought the story of The Odyssey to 1937 Mississippi: Odysseus becomes Ulysses Everett McGill, an escaped convict trying to con, hitchhike, and sing his way home before his wife remarries.

What’s your roadtrip story? We want to hear your best story from the open road! Draw a map and share a memory in the lobby.

The Dog of the South Program

The program for Book-It Repertory Theatre's production of The Dog of the South by Charles Portis. 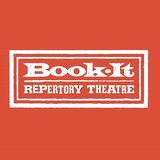