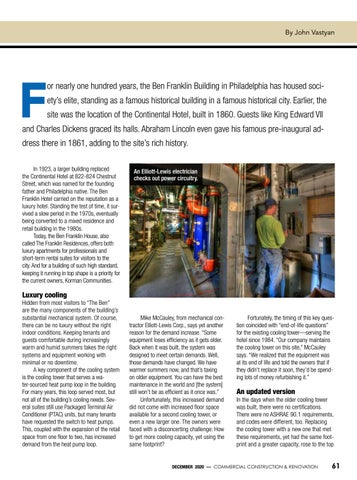 and Charles Dickens graced its halls. Abraham Lincoln even gave his famous pre-inaugural address there in 1861, adding to the site’s rich history.

In 1923, a larger building replaced the Continental Hotel at 822-824 Chestnut Street, which was named for the founding father and Philadelphia native. The Ben Franklin Hotel carried on the reputation as a luxury hotel. Standing the test of time, it survived a slow period in the 1970s, eventually being converted to a mixed residence and retail building in the 1980s. Today, the Ben Franklin House, also called The Franklin Residences, offers both luxury apartments for professionals and short-term rental suites for visitors to the city. And for a building of such high standard, keeping it running in top shape is a priority for the current owners, Korman Communities.

Hidden from most visitors to “The Ben” are the many components of the building’s substantial mechanical system. Of course, there can be no luxury without the right indoor conditions. Keeping tenants and guests comfortable during increasingly warm and humid summers takes the right systems and equipment working with minimal or no downtime. A key component of the cooling system is the cooling tower that serves a water-sourced heat pump loop in the building. For many years, this loop served most, but not all of the building’s cooling needs. Several suites still use Packaged Terminal Air Conditioner (PTAC) units, but many tenants have requested the switch to heat pumps. This, coupled with the expansion of the retail space from one floor to two, has increased demand from the heat pump loop.

Mike McCauley, from mechanical contractor Elliott-Lewis Corp., says yet another reason for the demand increase. “Some equipment loses efficiency as it gets older. Back when it was built, the system was designed to meet certain demands. Well, those demands have changed. We have warmer summers now, and that’s taxing on older equipment. You can have the best maintenance in the world and [the system] still won’t be as efficient as it once was.” Unfortunately, this increased demand did not come with increased floor space available for a second cooling tower, or even a new larger one. The owners were faced with a disconcerting challenge: How to get more cooling capacity, yet using the same footprint?

Fortunately, the timing of this key question coincided with “end-of-life questions” for the existing cooling tower—serving the hotel since 1984. “Our company maintains the cooling tower on this site,” McCauley says. “We realized that the equipment was at its end of life and told the owners that if they didn’t replace it soon, they’d be spending lots of money refurbishing it.”