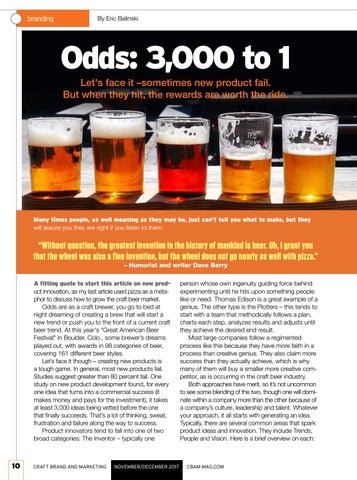 Odds: 3,000 to 1 Let's face it –sometimes new product fail. But when they hit, the rewards are worth the ride.

Many times people, as well meaning as they may be, just can’t tell you what to make, but they will assure you they are right if you listen to them.

“Without question, the greatest invention in the history of mankind is beer. Oh, I grant you that the wheel was also a fine invention, but the wheel does not go nearly as well with pizza.” – Humorist and writer Dave Barry

A fitting quote to start this article on new product innovation, as my last article used pizza as a metaphor to discuss how to grow the craft beer market. Odds are as a craft brewer, you go to bed at night dreaming of creating a brew that will start a new trend or push you to the front of a current craft beer trend. At this year's "Great American Beer Festival" in Boulder, Colo., some brewer’s dreams played out, with awards in 98 categories of beer, covering 161 different beer styles. Let’s face it though – creating new products is a tough game. In general, most new products fail. Studies suggest greater than 80 percent fail. One study on new product development found, for every one idea that turns into a commercial success (it makes money and pays for the investment), it takes at least 3,000 ideas being vetted before the one that finally succeeds. That’s a lot of thinking, sweat, frustration and failure along the way to success. Product innovators tend to fall into one of two broad categories: The Inventor – typically one

person whose own ingenuity guiding force behind experimenting until he hits upon something people like or need. Thomas Edison is a great example of a genius. The other type is the Plotters – this tends to start with a team that methodically follows a plan, charts each step, analyzes results and adjusts until they achieve the desired end result. Most large companies follow a regimented process like this because they have more faith in a process than creative genius. They also claim more success than they actually achieve, which is why many of them will buy a smaller more creative competitor, as is occurring in the craft beer industry. Both approaches have merit, so it’s not uncommon to see some blending of the two, though one will dominate within a company more than the other because of a company’s culture, leadership and talent. Whatever your approach, it all starts with generating an idea. Typically, there are several common areas that spark product ideas and innovation. They include Trends, People and Vision. Here is a brief overview on each: