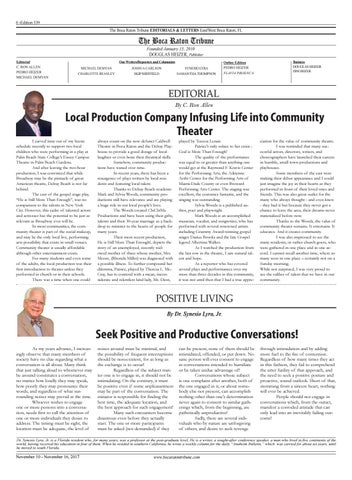 Our Writers/Reporters and Columnists MICHAEL DEMYAN

I carved time out of my hectic schedule recently to support two local children who were performing in a play at Palm Beach State College’s Eissey Campus Theatre in Palm Beach Gardens. And after leaving the two-hour production, I was convinced that while Broadway may be the pinnacle of great American theatre, Delray Beach is not far behind. The cast of the gospel stage play, “He is Still More Than Enough”, was no comparison to the talents in New York City. However, this cadre of talented actors and actresses has the potential to be just as relevant as Broadway ever will be. In most communities, the community theater is part of the social makeup, and may be the only local live, performing arts possibility that exists in small venues. Community theater is usually affordable although other entertainment exists. For many students and even some of the adults, the local production was their first introduction to theater unless they performed in church or in their schools. There was a time when one could

always count on the now defunct Caldwell Theatre in Boca Raton and the Delray Playhouse to provide a good dosage of local laughter or even hone their theatrical skills. Somehow, community productions have waned over time. In recent years, there has been a resurgence of plays written by local residents and featuring local talent. Thanks to Delray Beach residents Mark and Sylvia Woods, community productions still have relevance and are playing a huge role in our local people’s lives. The Woods created ChiChiMa Productions and have been using their gifts, talents and their 30-year marriage as a backdrop to minister to the hearts of people for many years. Their most recent production, He is Still More Than Enough!, depicts the story of an unemployed, recently widowed mother of three whose mother, Mrs. Moore, (Rhonda Miller) was diagnosed with a possible illness. To further compound her dilemma, Patrice, played by Theresa L. McCray, has to contend with a mean, inconsiderate and relentless land lady, Ms. Dion,

played by Toccoa Lenair. Patrice’s only solace to her crisis God is More Than Enough! The quality of the performance was equal to or greater than anything one would get at the Raymond F. Kravis Center for the Performing Arts, the Adrienne Arsht Center for the Performing Arts of Miami-Dade County or even Broward Performing Arts Center. The staging was excellent, the costumes fantastic, and the singing was outstanding. Sylvia Woods is a published author, poet and playwright. Mark Woods is an accomplished musician, vocalist, and songwriter, who has performed with several renowned artists including Grammy Award-winning gospel singer Darius Brooks and the late Gospel legend Albertina Walker. As I watched the production from the last row in the theatre, I saw natural talent and hope. As a reporter who has covered several plays and performances over my more than three decades in this community, it was not until then that I had a true appre-

ciation for the value of community theatre. I was reminded that many successful actors, directors, writers, and choreographers have launched their careers in humble, small town productions and playhouses. Some members of the cast were making their debut appearance and I could just imagine the joy in their hearts as they performed in front of their loved ones and friends. This was also great outlet for the many who always thought - and even knew - they had it but because they never got a chance to leave the area, their dreams never materialized before now. Thanks to the Woods, the value of community theater remains. It entertains. It educates. And it creates community. I was also impressed to see the many residents, or rather church goers, who were gathered in one place and in one accord. I cannot recall another time, where so many were in one place – certainly not on a Sunday morning. While not surprised, I was very proud to see the caliber of talent that we have in our community.

Seek Positive and Productive Conversations! As my years advance, I increasingly observe that many members of society have no clue regarding what a conversation is all about. Many think that just talking aloud to whomever may be around constitutes a conversation, no matter how loudly they may speak, how poorly they may pronounce their words, and regardless of what surrounding noises may prevail at the time. Whoever wishes to engage one or more persons into a conversation, needs first to call the attention of one or more individuals they desire to address. The timing must be right, the location must be adequate, the level of

noises around must be minimal, and the possibility of frequent interruptions should be non-existent, for as long as the exchange is to occur! Regardless of the subject matter one is to engage in, it should not be intimidating. On the contrary, it must be positive even if some unpleasantness may be part of the conversation. The initiator is responsible for finding the best time, the adequate location, and the best approach for such engagement! Many such encounters become disastrous even before they actually start. The one or more participants must be asked (not demanded) if they

can be present; none of them should be intimidated, offended, or put down. No sane person will ever consent to engage in conversations intended to humiliate or be taken undue advantage of! Conversations whose subject is one complaint after another, both of the one engaged in it, or about somebody else not present, can accomplish nothing other than one’s determination never again to consent to similar gatherings which, from the beginning, are pathetically unproductive! Sadly, there are several individuals who by nature are unforgiving of others, and desire to seek revenge

through intimidation and by adding more fuel to the fire of contention. Regardless of how many times they act in this fashion, they fail to comprehend the utter futility of that approach, and the need to seek a positive posture and proactive, sound outlook. Short of that, stemming from a sincere heart, nothing will ever be achieved. People should not engage in conversations which, from the outset, manifest a corroded attitude that can only lead into an inevitably failing outcome!

Dr. Synesio Lyra, Jr. is a Florida resident who, for many years, was a professor at the post-graduate level. He is a writer, a sought-after conference speaker, a man who lived in five continents of the world, having received his education in four of them. When he resided in southern California, he wrote a weekly column for the daily “Anaheim Bulletin,” which was carried for about six years, until he moved to south Florida. 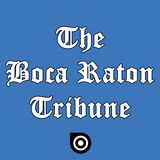 The 339th Edition of The Boca Raton Tribune

The 339th Edition of The Boca Raton Tribune