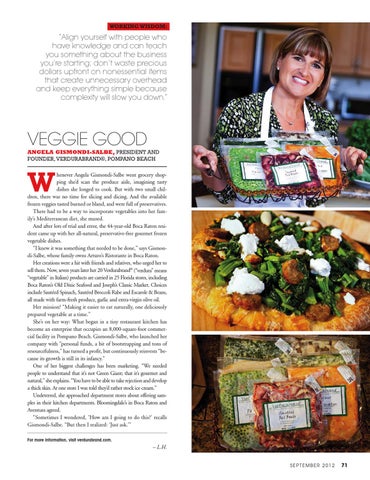 “Align yourself with people who have knowledge and can teach you something about the business you’re starting; don’t waste precious dollars upfront on nonessential items that create unnecessary overhead and keep everything simple because complexity will slow you down.”

VEGGIE GOOD ANGELA GISMONDI-SALBE, PRESIDENT AND FOUNDER, VERDURABRAND®, POMPANO BEACH henever Angela Gismondi-Salbe went grocery shopping she’d scan the produce aisle, imagining tasty dishes she longed to cook. But with two small children, there was no time for slicing and dicing. And the available frozen veggies tasted burned or bland, and were full of preservatives. There had to be a way to incorporate vegetables into her family’s Mediterranean diet, she mused. And after lots of trial and error, the 44-year-old Boca Raton resident came up with her all-natural, preservative-free gourmet frozen vegetable dishes. “I knew it was something that needed to be done,” says Gismondi-Salbe, whose family owns Arturo’s Ristorante in Boca Raton. Her creations were a hit with friends and relatives, who urged her to sell them. Now, seven years later her 20 Verdurabrand® (“verdura” means “vegetable” in Italian) products are carried in 25 Florida stores, including Boca Raton’s Old Dixie Seafood and Joseph’s Classic Market. Choices include Sautéed Spinach, Sautéed Broccoli Rabe and Escarole &amp; Beans, all made with farm-fresh produce, garlic and extra-virgin olive oil. Her mission? “Making it easier to eat naturally, one deliciously prepared vegetable at a time.” She’s on her way: What began in a tiny restaurant kitchen has become an enterprise that occupies an 8,000-square-foot commercial facility in Pompano Beach. Gismondi-Salbe, who launched her company with “personal funds, a bit of bootstrapping and tons of resourcefulness,” has turned a profit, but continuously reinvests “because its growth is still in its infancy.” One of her biggest challenges has been marketing. “We needed people to understand that it’s not Green Giant; that it’s gourmet and natural,” she explains. “You have to be able to take rejection and develop a thick skin. At one store I was told they’d rather stock ice cream.” Undeterred, she approached department stores about offering samples in their kitchen departments. Bloomingdale’s in Boca Raton and Aventura agreed. “Sometimes I wondered, ‘How am I going to do this?’ recalls Gismondi-Salbe. “But then I realized: ‘Just ask.’”