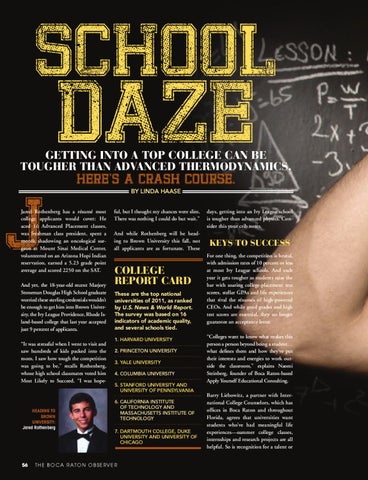 GETTinG inTO A TOp COllEGE CAn BE TOUGhEr ThAn AdvAnCEd ThErmOdYnAmiCS. By Linda Haase Jared Rothenberg has a résumé most college applicants would covet: He aced 16 Advanced Placement classes, was freshman class president, spent a month shadowing an oncological surgeon at Mount Sinai Medical Center, volunteered on an Arizona Hopi Indian reservation, earned a 5.23 grade point average and scored 2250 on the SAT. And yet, the 18-year-old recent Marjory Stoneman Douglas High School graduate worried these sterling credentials wouldn’t be enough to get him into Brown University, the Ivy League Providence, Rhode Island-based college that last year accepted just 9 percent of applicants. “It was stressful when I went to visit and saw hundreds of kids packed into the room. I saw how tough the competition was going to be,” recalls Rothenberg, whose high school classmates voted him Most Likely to Succeed. “I was hope-

ful, but I thought my chances were slim. There was nothing I could do but wait.” And while Rothenberg will be heading to Brown University this fall, not all applicants are as fortunate. These

days, getting into an Ivy League school is tougher than advanced physics. Consider this your crib notes.

KEYS TO SUCCESS For one thing, the competition is brutal, with admission rates of 10 percent or less at most Ivy League schools. And each year it gets tougher as students raise the bar with soaring college-placement test scores, stellar GPAs and life experiences that rival the résumés of high-powered CEOs. And while good grades and high test scores are essential, they no longer guarantee an acceptance letter. “Colleges want to know what makes this person a person beyond being a student… what defines them and how they’ve put their interests and energies to work outside the classroom,” explains Naomi Steinberg, founder of Boca Raton-based Apply Yourself Educational Consulting. Barry Liebowitz, a partner with International College Counselors, which has offices in Boca Raton and throughout Florida, agrees that universities want students who’ve had meaningful life experiences—summer college classes, internships and research projects are all helpful. So is recognition for a talent or