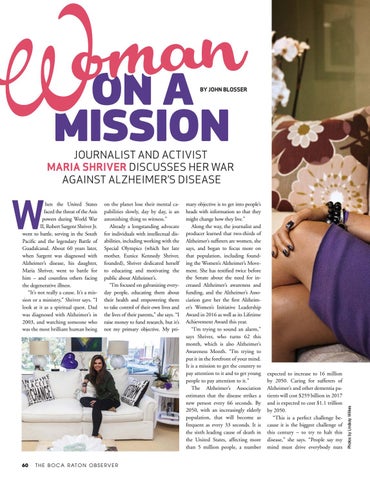 hen the United States faced the threat of the Axis powers during World War II, Robert Sargent Shriver Jr. went to battle, serving in the South Pacific and the legendary Battle of Guadalcanal. About 60 years later, when Sargent was diagnosed with Alzheimer’s disease, his daughter, Maria Shriver, went to battle for him – and countless others facing the degenerative illness. “It’s not really a cause. It’s a mission or a ministry,” Shriver says. “I look at it as a spiritual quest. Dad was diagnosed with Alzheimer’s in 2003, and watching someone who was the most brilliant human being

on the planet lose their mental capabilities slowly, day by day, is an astonishing thing to witness.” Already a longstanding advocate for individuals with intellectual disabilities, including working with the Special Olympics (which her late mother, Eunice Kennedy Shriver, founded), Shriver dedicated herself to educating and motivating the public about Alzheimer’s. “I’m focused on galvanizing everyday people, educating them about their health and empowering them to take control of their own lives and the lives of their parents,” she says. “I raise money to fund research, but it’s not my primary objective. My pri-

mary objective is to get into people’s heads with information so that they might change how they live.” Along the way, the journalist and producer learned that two-thirds of Alzheimer’s sufferers are women, she says, and began to focus more on that population, including founding the Women’s Alzheimer’s Movement. She has testified twice before the Senate about the need for increased Alzheimer’s awareness and funding, and the Alzheimer’s Association gave her the first Alzheimer’s Women’s Initiative Leadership Award in 2016 as well as its Lifetime Achievement Award this year. “I’m trying to sound an alarm,” says Shriver, who turns 62 this month, which is also Alzheimer’s Awareness Month. “I’m trying to put it in the forefront of your mind. It is a mission to get the country to pay attention to it and to get young people to pay attention to it.” The Alzheimer’s Association estimates that the disease strikes a new person every 66 seconds. By 2050, with an increasingly elderly population, that will become as frequent as every 33 seconds. It is the sixth leading cause of death in the United States, affecting more than 5 million people, a number

expected to increase to 16 million by 2050. Caring for sufferers of Alzheimer’s and other dementia patients will cost $259 billion in 2017 and is expected to cost $1.1 trillion by 2050. “This is a perfect challenge because it is the biggest challenge of this century – to try to halt this disease,” she says. “People say my mind must drive everybody nuts

The Authority on Boca And Beyond