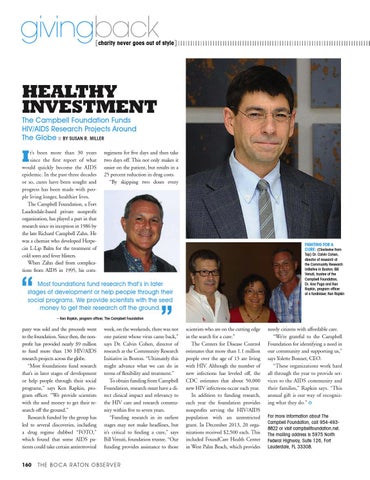 [charity never goes out of style]

HEALTHY INVESTMENT The Campbell Foundation Funds HIV/AIDS Research Projects Around The Globe BY SUSAN R. MILLER t’s been more than 30 years since the first report of what would quickly become the AIDS epidemic. In the past three decades or so, cures have been sought and progress has been made with people living longer, healthier lives. The Campbell Foundation, a Fort Lauderdale-based private nonprofit organization, has played a part in that research since its inception in 1986 by the late Richard Campbell Zahn. He was a chemist who developed Herpecin L-Lip Balm for the treatment of cold sores and fever blisters. When Zahn died from complications from AIDS in 1995, his com-

regimens for five days and then take two days off. This not only makes it easier on the patient, but results in a 25 percent reduction in drug costs. “By skipping two doses every

FIGHTING FOR A CURE: (Clockwise from

Most foundations fund research that’s in later stages of development or help people through their social programs. We provide scientists with the seed money to get their research off the ground. – Ken Rapkin, program officer, The Campbell Foundation

pany was sold and the proceeds went to the foundation. Since then, the nonprofit has provided nearly $9 million to fund more than 130 HIV/AIDS research projects across the globe. “Most foundations fund research that’s in later stages of development or help people through their social programs,” says Ken Rapkin, program officer. “We provide scientists with the seed money to get their research off the ground.” Research funded by the group has led to several discoveries, including a drug regime dubbed “FOTO,” which found that some AIDS patients could take certain antiretroviral 160

week, on the weekends, there was not one patient whose virus came back,” says Dr. Calvin Cohen, director of research at the Community Research Initiative in Boston. “Ultimately this might advance what we can do in terms of flexibility and treatment.” To obtain funding from Campbell Foundation, research must have a direct clinical impact and relevancy to the HIV care and research community within five to seven years. “Funding research in its earliest stages may not make headlines, but it’s critical to finding a cure,” says Bill Venuti, foundation trustee. “Our funding provides assistance to those

scientists who are on the cutting edge in the search for a cure.” The Centers for Disease Control estimates that more than 1.1 million people over the age of 13 are living with HIV. Although the number of new infections has leveled off, the CDC estimates that about 50,000 new HIV infections occur each year. In addition to funding research, each year the foundation provides nonprofits serving the HIV/AIDS population with an unrestricted grant. In December 2013, 20 organizations received $2,500 each. This included FoundCare Health Center in West Palm Beach, which provides

needy citizens with affordable care. “We’re grateful to the Campbell Foundation for identifying a need in our community and supporting us,” says Yolette Bonnet, CEO. “These organizations work hard all through the year to provide services to the AIDS community and their families,” Rapkin says. “This annual gift is our way of recognizing what they do.” O For more information about The Campbell Foundation, call 954-4938822 or visit campbellfoundation.net. The mailing address is 5975 North Federal Highway, Suite 126, Fort Lauderdale, FL 33308.